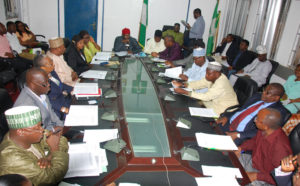 The Permanent Secretary, Federal Ministry of Labour and Productivity, Dr.Clement Illoh has called for the social inclusion and empowerment of the Nigerian senior citizens in the scheme of nation building.
The Permanent Secretary made the call in Abuja today at the Interactive Session and the Signing of Memorandum of Understanding (MOU) with the International Federation on Ageing Nigeria (IFAN).
He painted the vivid picture of how poorly some of the elderly are being treated in the country even by their own children describing it as worrisome which sometimes are being abandoned and left to their fate adding that there is the urgent need for government to move in swiftly and address this ugly trend headlong.
To this end, he said: “Government is redoubling its efforts to adopt several strategies in terms of identification of elders for voluntary works, transmission of their experiences and knowledge to younger ones, the issue of assistance to families in terms of family responsibilities are of paramount importance”.
Dr.Illoh called for increasing participation of the elderly in the labour force stressing that they still constitute part of the active labour force of the country.
He explained that the MOU the Ministry signed with IFAN focused on three critical areas to include the Elderly Empowerment Scheme, National Productivity Audit and the Elderly Social Response Initiative with particular emphasis on information, education, promotion of policies, programmes and international best practices with the overall aim of improving the quality of lives of the elderly persons in terms of their own lives, the community and the nation.
He expressed optimism that the signing of the MOU underscored Government commitment to the public private partnership which is key to the development of social security in Nigeria.
The Permanent Secretary maintained that the issue of social security is not new to his Ministry, adding that the Nigerian National Social Insurance Trust Fund (NSITF) is solidly committed to the provision of social security to Nigerians.
He stressed that at the moment, the NSITF is covering the issue of social security in the world of work by implementing the employee compensation scheme.
In his words “The NSITF has done a very good classical work, a blue print has been developed on the provision of social assistance to Nigerians and the document will soon be forwarded to Government for consideration and necessary directives’’ He disclosed.
He recalled on the present Administration of President Muhammadu Buhari GCFR which has one of its cardinal programmes, the transformation of social assistance to Nigerians adding that the Federal Ministry of Labour and Productivity is proud to identify with this lofty initiative which also falls within the purview of its competence statutory responsibility.
Elaborating on the Elderly Employment Scheme which is one of the three critical areas of the MOU, he called on every Nigerians not to see retirement as the end of life.
In his words:  “ Retirement is not the end of life, it is not a death sentence, you should look at retirement with pride and see it as second phase of your life, look at it with optimism instead of looking at it as a punishment, the earlier we change our mindsets on this misconception, the better”.
The Permanent Secretary assured that Government will continue to support and encourage the signed MOU to the highest level of implementation noting that the Ministry has the expertise and capacity to perform and give it the maximum publicity it deserves pointing out that NSITF will drive the process to a reasonable conclusion so that it becomes part of the consciousness of the Nigerian society. He concluded.
Earlier, the Director ,International Federation on Ageing-Nigeria (IFAN), Ike Willie- Nwobu in his address  emphasized on the importance of the social security of the elderly which is strategic to the National Security adding that it is a major platform towards building culture of National Resilience.
While expressing worry over the absence of survey on the elderly productivity index in the country, he said that he was delighted that the collaboration of the Federal Ministry of Labour and IFAN will help deliver to Nigeria this survey and studies that is necessary, needful and strategic to our national development data and record.
Also speaking, the Director of Social Security and Cooperative Development, Mrs. Mojisola Sonubi  said that it is a natural phenomenon that as people grow older, their strengths weaken and productivity drops and retirement becomes imperative stressing that it beholds on government at all levels to protect this group of people and improve their quality of lives.
She noted that engaging the senior citizens could provide solutions to the challenges facing Nigeria in the areas of child labour, insurgency, insecurity as well as unemployment noting that sharing in their wealth of experience can help the nation to bounce back to its glorious days while making the senior citizens feel involved in the promotion of ethics, values and culture.