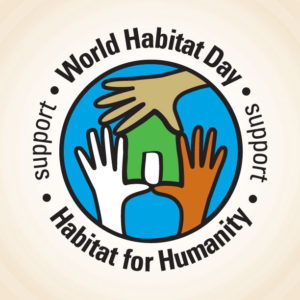 Nigeria joined the rest of the world to commemorate this year’s World  Habitat Day , Monday 5, 2015 with a call for concerted efforts to draw attention to the global reality of individual inclination for adequate space in order to access social, economic,political, educational attainment and healthy living standard  especially in cities.The theme for this year’s commemoration: “Public Spaces for All” is  aimed at affording Countries the opportunity to refocus efforts at redressing all subtle and obvious restrictions to popular access to public  spaces particularly in the current era of positive national change.

Speaking at the occasion, Permanent Secretary in the Ministry of Lands, Housing and Urban Development, Mr George Ossi said the day was momentous, as it came barely a week after over 193 world leaders met at the United Nations General Assembly to adopt 17 new sustainable  Development Goals (SDGs) to succeed the Millennium  Development Goals ( MDG) in a continued search for the next 15 years. The  adopted goals tagged Goal 11 of the SDGs is focused on making cities and human settlements inclusive, safe resident and sustainable.
The Permanent Secretary who was represented by Director, Engineering Services, Arc. Sani Gidado observed that this year’s theme  could be seen as a strong attempt to follow up on the 2011 United Nations Resolution on Sustainable Urban Development through Access to Quality Urban Public Space. He therefore reiterates the Ministry’s commitment to restore the sanctity of public spaces and streets and called on relevant stakeholders and professionals in the built environment to join in giving priority to the provision of  adequate public space in cities designs and urban renewal projects.
He bemoaned the depressing reality that has characterized the gradual disappearance of public open spaces, streets, walkways, ornamental trees and monuments as well as recreation parks and recreation centers that were unmistakably  parts of the landscape of towns and cities.  He said the effect of the trend was worrisome as it has negatively impacted on cities’ green geography and increasing incidences of harsh floods, erosion heat wave and other micro climatic conditions, lack of recreational spaces amongst others.
In a statement from the Secretary- General of the United Nations, Ban Ki- Moon read by Habitat programme Manager for Nigeria, Mr Kabir Yari on behalf by UN Resident/ Humanitarian Coordinator, Ms Jean Gough, said the celebration of the World Habitat Day was an annual event to recognize the basic right of all humanity to adequate shelter and to encourage grassroots action toward ending poverty housing.
He said Habitat joined its partners across the world to rededicate itself to a world where everyone has a decent place to live, adding that each year’s theme is drawn on current issues relevant to the Habitat Agenda which is to bring attention to UN-Habitat’s mandate to promote sustainable development policies that ensure adequate shelter for all.
In a goodwill message from UN-Habitat Executive Director, Dr Joan Clos explained that public space provides room for social and cultural interaction and can foster a sense of belonging and pride in an area, adding that such spaces help to shape the cultural identity of an area.
Dr Clos further observed that where public spaces are inadequate, poorly designed or privatized, the city becomes increasingly segregated, likely causing social tensions, rising crime and violence. He stated that public spaces was critical for economic sustainability and environmental benefits such as helping in the cooling of air and the absorption of atmospheric pollutants.
Other Goodwill messages at the occasion drummed support on the need for policy makers and city planners to review its building code in order to reclaim public spaces initially earmarked for recreational centers, children’s parks etc to halt the trend of the conversion if public spaces to either dump sites or buildings.
Eno Olotu (Mrs)
For: Director(Press)