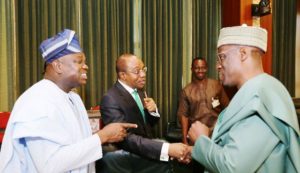 A.      Report on Excess Crude Proceeds:
* Permanent Secretary, Ministry of Finance briefed the Council that the ECA stood at $2.25 billion as at October 15, 2015
* Council took note of the update
B.      Provision of Concessionary Loans to States based on collateralization of the ECA:
* CBN Governor briefed the Council that 27 States have made request for the N10 billion facilities and is being processed.
* He called on the affected States to complete all the necessary documentation
C.      A brief report on FGN Agencies remitting Dollar revenues in Naira into the Federation Account was given by the CBN Governor. He said investigations are still on-going:
* Such agencies include NNPC, NIMASA and NPA
D.      Refund of Expenses incurred on the Repair of Federal Roads by the State Governments:
* The Vice President told the Council that the refund of the expenses is under review by the Federal Government.
E.       Update on Flooding in all affected States
* The Vice President told the Council of the FG’s readiness to intervene and discussions on the matter is progressing
Laolu Akande
Senior Special Assistant (Media & Publicity)
In the Vice President’s Office