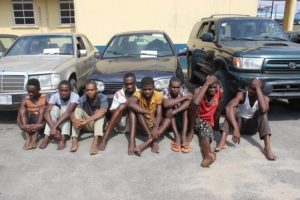 I am delighted to once again welcome you this morning to share with you and by extension the general public about the activities of the Command in the last few days.  It would not be out of context for me to say that our efforts in crime fighting in the State are yielding significant results. This can be predicated in our sustained and improved response time to distress calls.
While being mindful of your respective media time and space, its pertinent to highlight some of the breakthroughs the Command recorded within the period under review:-
FOILED KIDNAPPING: On 10/11/2015 at about 9:00 pm at Arazona off Peter Odili Road, Port Harcourt, a team of Policemen acting on a distress call that on Mr. Emmanuel Akujobi who has kidnapped by armed men operating in a Volkswagen Golf 3 saloon car. The team chased the suspected kidnappers thereby forcing them to abandon the victim, their operational vehicle and the victim’s Lexus Jeep registration No. ABJ 724 BC. One of the suspected kidnappers also got fatally wounded during shot out with policemen. This effort has no doubt confirmed that our response time to distress calls has greatly improved.
Similarly, one Austin Kalu ‘m’ 28 years who was kidnapped on 07/11/2015 at Rumudara was safely rescued on 13/11/2015 at Ogbakiri forest while one of the suspected kidnappers named Emenike Sunday was arrested and a locally made short gun and five live cartridges were recovered at the scene.
ARMED ROBBERY: On 01/11/2014 at about 5:03 am, Policemen on routine patrol along Ada George road, Port Harcourt, sighted a suspicious black Honda Civic with registration No. AHD 145 RX with three young male occupants and on approaching the vehicle the occupants opened fire on the policemen. Three of them got fatally wounded after a gun duel with the policemen while one AK 47 rifle, two magazines, 50 rounds of 7.62 live ammunition, a complete set of police uniform and a police bullet proof vest were recovered.
In a similar vein, the Command smashed a gang of armed robbers who specialized in trailing unsuspecting bank customers and rob them off their hard earned money soon after money withdrawal either through Automated Teller Machine (ATM) or from the banking hall. The duo of Hycinth Apasu and Akelachi Nwobike were on 06/11/2015 were arrested at their hiodeout at Emekuku, Port Harcourt and have confessed to be the gang that terrorizes bank customers around Azikwe and Olu-Obasanjo axis of Port Harcourt. Three suspected stolen vehicles were also recovered from them:
1. Toyota Corolla saloon car with registration No. ABC 664 ST
2. Toyota Lexus Jeep with registration No. FKJ 727 BQ
3 . Toyota Corolla saloon car with registration No. BRS 731 SM
CULTISM:- The following suspected cultist were arrested at Amunugboko community in Ahoada West L. G. A. for belonging to Iceland cult group. They are:-
i.  Kingsley Boy ‘m’ 24 years
ii. Christopher Agolo  ‘m’ 29 years
iii. Buduzhi Okpara  ‘m’ 29 years
iv. Goodnews Okpara  ‘m’ 23 years
v.  Valentine Okpara  ‘m’ 19 years
vi. Wisdom Ogbani ‘m’ 23 years.
While seven other suspected cultists were also arrested at Igwuruta, they have confessed to be members of Deywell cult group that terrorizes the area. They are:-
i.  Bestman Ikenga ‘m’ 30 years
ii. Marshal Ikenga ‘m’ 33 years
iii. Chukwudu Nwankwo  ‘m’ 21 years
iv. Uche Nwankwo  ‘m’ 39 years
v.  Lucky Enyi  ‘m’ 22 years
vi. Temple Opurim ‘m’ 25 years
vii. Joshua Opurum ‘m’ 36 years.
The arrest of the above listed young men has brought peace to their respective Communities. The arrest of King Maaloo ‘m’ 21 years and Emaka Nduah ‘m’ 29 years, Kenneth Ekpeye ‘m’ 39 years, Patrick Ogbonnaya ‘m’ 27 years and Frank Onuoha ‘m’ 22 years at different locations for belonging respective cult groups has also added an impetus to our fight against cultism.
Below is a summary of the achievements recorded within above stipulated timeframe:-
No. of suspected armed robbers arrested   –  30
No. of suspected armed robbers fatally wounded  –  3
No. of suspected kidnappers arrested   –  12
No. of suspected kidnappers fatally wounded   –  7
No. of kidnaped victims rescued   –   11
No of suspected cultists arrested   –   21
No. of firearms recovered
i.   AK 47 rifles – 2
ii.  Locally made pistols – 8
iii. Double barrel gun – 1
iv. Single barrel guns – 1
v.  English made pistol – 1
vi. Berretta pistol – 1
vii. Locally made guns – 4
viii. Magazines – 4
No. of assorted ammunition recovered   –  84
No. of cartridges recovered   –   17
No. of vehicles recovered   –  15
Some dried leaves suspected to be marijuana
These achievements are largely predicated to the tremendous support the Command is enjoying from the security conscious and patriotic citizens by way of volunteering timely, credible and actionable information.
Finally, the Command equally reiterates its determination to sustain the onslaught to the identified similar criminals’ hideouts. Such operation would be sustained with all vigour until the nefarious activities of the undesirable elements is brought to halt.