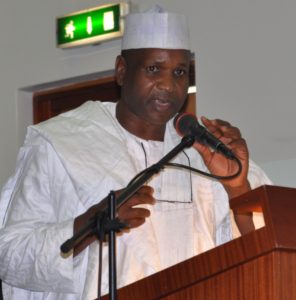 Acting Chairman of Economic and Financial Crimes Commission, EFCC, Ibrahim Magu, has said that the Commission will leave no stone unturned in the effort to recover public funds that have been stolen in the guise of arms procurement in Nigeria.
Magu, who stated that the Commission was on top of the ongoing investigation, added that all the culprits in the arms procurement scandal would be brought to justice.
Speaking at the commemoration of the International Anti-corruption Day which has as theme, ‘‘Break the Corruption Chain’’ on Wednesday, December 9 at the Shehu Musa Yar’Adua Centre, Abuja, he said:  ‘‘Corruption is like a chain whose effect impacts various aspects of the society, undermines democracy and the rule of law, distorts markets, erodes quality of life, leads to human rights violations and fans the embers of
terrorism and other threats to human security.’’
Magu, who said the Commission had resolved to break the corruption chain in a fair, accountable and transparent manner, also stated that the Commission had so far investigated a total of 1,881 cases within 2015 alone.
According to him, “Out of this figure, 280 cases were filed in courts and 78 convictions were secured. In this period also, eight interim and two final forfeiture orders were handed down by various courts on applications brought by the Commission”.
The EFCC boss further added that he had put in place machinery to sanitise the Commission internally.
He also expressed gratitude to President Muhammadu Buhari for creating an enabling environment for the Commission to carry out its mandate, adding that he would undertake institutional reforms to increase the Commission’s capacity to fight corruption.
He, therefore, urged civil service organizations as well as other partners to join hands with the Commission in the anti-corruption fight.
‘‘Our common resolve is far stronger than the challenges we face in the fight against corruption.  I call on you to embrace the EFCC’s  public enlightenment campaigns, the activities of our Zero Tolerance Clubs in tertiary institutions and our inter-faith initiatives because in this effort to break the corruption chain, no man is an island and only when we work together can we make a difference.’’
Earlier, the Secretary-General of the United Nations, Ban Ki-Moon, said corruption had disastrous impacts on development when funds meant for social amenities were diverted by public office holders for their personal use.
Ban Ki-moon, who was represented on the occasion, added that corruption could exacerbate violence and insecurity.
‘It is time to deliver a clear message around the world that rejects corruption and embraces the principles of transparency, accountability and good governance. This will benefit communities and countries; and it will help to usher in a better future for all,’’ he added.
In his remark, the Director-General of the Bureau of Public Service Reforms, BPSR, Dr. Joe Abah, called for the enhancement of the Code of Conduct Bureau, CCB.
He further stated that the newly introduced zero- based budgeting would ensure discipline in the implementation of budgets.
Also, Lilian Ekeanyanwu, representing the Technical Unit on Governance and Anti-Corruption Reforms, TUGAR, urged the anti-corruption community to take advantage of the positive body language emanating from the Presidency.
“We must hit the ground running. We must have a national strategy to bring awareness about the issue of corruption and find methods to curb the malaise, while keeping the populace involved,” she said.
The Deputy Chief Mission of the United States Embassy, Maria E. Brewer, in her remark, stated that corruption could undermine institutions and slow development of any nation.
She said that the United States was ready to partner with Nigeria in the fight against corruption.
This year’s anti-corruption day was organised by the Inter-Agency Task Team (IATT), the European Union (EU) and the United Nations Office on Drugs and Crime (UNODC). It holds on December 9, every year.
In attendance at the event, which featured a debate on corruption elimination between students of Light Way Academy and Model Secondary School Maitama, Abuja, were participants from the Budget Office, Independent Corrupt Practices and Other Offences Commission, ICPC, Nigerian Financial Intelligence Unit, NFIU, TUGAR, Bureau of Public Procurement, Corporate Affairs Commission, Public Complaints Commission, the Nigeria Police, National Drug Law Enforcement Agency, NDLEA, Federal Inland Revenue Service, FIRS, Ministry of Justice and Ministry of Finance, among others.
Wilson Uwujaren
Head, Media & Publicity
9th December, 2015
—
PRNigeria encourages institutions to be transparent in their information management as it provides news items from authoritative sources for free use by the media