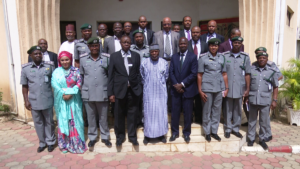 The Comptroller-General of Customs, Col. Hameed Ibrahim Ali (rtd.), has described the Economic and Financial Crimes Commission, EFCC, as the pivot on which the fight against corruption in Nigeria rests.
He said that the leadership of the Service had also realised that having a mutual relationship with the Commission was a necessity.
According to him, “We have realised that the pivot or nucleus of fighting corruption in this country is this organization. Also, we have realised that we, on our own, cannot function effectively, if we do not get a common platform with a lot of organizations. On resumption of the( new) leadership of the Nigeria Customs Service, after taking stock of what we have been doing and what we need to do, we discovered that creating synergies and relationships with agencies such as yours is a necessity and not an option. It is a must because we want to succeed; and to achieve this, we need a common platform”.
Ali who was speaking during a courtesy call on the acting Chairman of EFCC, Ibrahim Magu, in his office in Abuja on Thursday, December 10, 2015, said the visit was primarily to pay respect to the Commission and commend it for all that it had been doing to rid the country of corruption.
He further explained that the visit was aimed at underscoring the synergy that had been in existence between the two bodies, while also seeking a way to strengthening the relationship.
Ali, who described the business of law enforcement in Nigeria was a thankless job, however, commended the EFCC boss. ‘‘Nobody looks at you and says thank you for what you are doing. This is because at any given time that you have to compel somebody to do something, especially in a country like Nigeria where 99 percent of us are law breakers, you have a great task in your hand. Therefore, I do not envy your job.
‘‘I was a policeman for 27 years of my service in the  Military; so, I know what it is to investigate and really arrive at  a conclusion where you can indict somebody and send him or her before our judges of today and prove that the person has committed the alleged offence. So it is a great task.’’
Ali, who was accompanied by top management staff of the Service, also pledged his support for the Commission, adding that it was important to have a common platform, where both bodies could be interacting on a regular basis.
In his remark, Magu, who expressed gratitude to the team for the visit, stated that the existing relationship between EFCC and the Nigeria Customs Service had helped the Nigerian system in a lot of ways, in the fight against corruption.
He, however, called for a review of the mode of operation of the partnership, adding that ‘‘I know the importance of us working together.  But I want us to look at the mode of operations and see if there are fallout that need to be re-examined.’’
Secretary to the Commission, Adegboyega Aremo, who gave the vote of thanks, expressed the readiness of the Commission to build on the existing relationship with the Customs Service.
Wilson Uwujaren
Head, Media & Publicity