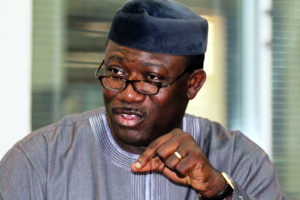 The Minister of Solid Minerals Development, Dr. Kayode Fayemi has expressed the Federal Government’s interest to collaborate with the Lagos State Ministry of Energy and Natural Resources on the States’ aspiration to focus on solid minerals and to also check health hazard of the mineral deposits in the state.The Minister said this when the Honourable Commissioner for Energy and Natural Resources, Lagos, Mr. Olawale Oluwo paid him a courtesy call in Abuja. Dr. Fayemi said that there is no way the country can succeed in minerals development if there is no partnership and collaboration between the Federal Government and States. He said minerals exploitation, though exclusive to the federal government, but in reality land ownership is also exclusive to the State governments. He said that for this reason there is need to work out the most appropriate manner in which mutual benefits will be guaranteed to those who are involved and also to protect the communities.Earlier, the Commissioner disclosed that in Eastern Lagos, it has been discovered that estimation of minerals such as limestone is in the region of 12 million metric tonnes in Epe. That silica sand is up to 200 billion cubic metric in Lekki and clay about 180 billion cubic metric in eastern part of Lagos.Mr. Oluwo further stated that the preliminary reports of geological assessment conducted revealed salt water intrusion of clean water mixed with salt. This, he said is seen as a major health challenge to the population. He said the geo-chemical investigation of top soil and road dust showed traces of heavy metal which can be very hazardous if not checked. He also said that the most significant one is on reconnaissance investigation which revealed traces of radioactive materials within Lagos axis. He said that these are the areas required for collaboration with the federal authorities and to check these tendencies as identified by his ministry.In response, the Minister referred to the Mining and Minerals Act which provides for community development and the insistence placed on ensuring that community ownership of whatever is being explored by government, private sector or any other interested stakeholders should ensure protection of communities’ interest.He said the Ministry will be interested in the specific detail of the geo-chemical assessment carried out by the state so as to share with the relevant agencies in the federal level to work and to assist Lagos in order to ensure the protection of lives and properties. Dr. Fayemi said the findings and availability of industrious minerals in Lagos state such as limestone, silica and clay can assist the Ministry to achieve import substitution if put to good use, using cement exportation as an indication of almost self-sufficiency in limestone exploitation. He said silica and clay are yet to be put to proper use as these are important minerals useful in the pharmaceutical sector and ceramics respectively. He promised that the relevant agency will verify the quantity of the mineral deposits in respond to the State’s request and the overall interest of the country.The Minister however noted that there is need to also address the issue of indiscriminate manner that dredging takes place in Lagos and other literal states for taxes without paying attention to the Mining and Minerals Act. He said the Inland Waterways, as a federal institution has the right to guarantee access in the water way around the country but the Ministry can collect royalties and taxes under the law. He advised that this is checked out in relation to Lagos State law and try to work out how best to protect the environment as well as ensure that whatever is done by way of dredging is in the ambit of the law. Sade FatokeFor: DD (Press)