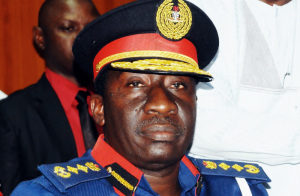 Governor Samuel Ortom of Benue State has praised the commitment to duty of the Nigeria Security and Civil Defence Corps (NSCDC), nationwide, especially in Benue State in their effort to ensure that peace is achieved in his state . He is happy with the support the Civil Defence is giving to the government of Benue State, as they assist in stemming the tide of communal clashes, cow rustling, retrieval of arms currently embarked upon by his administration and other activities that negates oneness in the state.

Ortom made this assertions during his working visit to the NSCDC National Headquarters, Abuja, where he was warmly welcomed and received by the Commandant General of the Corps, Abdullahi Gana Muhammadu. The Governor also promised to continue to support the Civil Defence in their worthy services they have continued to render selflessly to the nation, and believes firmly that the Grassroots Security Agency will not relent on their mandate to make Nigeria safe for all.

On his part, the Commandant General of the NSCDC, who was very elated on the visit of his Excellency, assured him that the Corps will remain committed to the execution of its constitutional mandate of Protection of Critical Infrastructure and National Assets, monitoring and supervising of the Private Guards industry in order to overhaul, sanitize and send illegal operators out of business. Collaborate with other sister Agencies, tackle every form of insecurity that might arise and to ensure prompt response to rescue operations of disaster affected victims.

Gana implored the Governor not to relent in taking the issue of security serious in the state, especially at this Critical time that the nation is engrossed with security challenges.

The Leader of Civil Defence solicited for aid for the Benue State Command urging the Governor to please provide enabling environment to the State Command in terms of logistics and befitting accommodation with operational vehicles.

Gana appreciated the encomium the Governor showered on the Corps, and promised that the Agency will never relent in making sure that their constitutional mandate is fully implemented which will have positive impact on the society in general. He also thanked the Governor for pledging support to the Corps and promised him that all assistance rendered the Corps will be used judiciously to attain lofty heights.