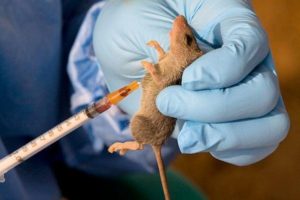 The Minister of Health, Professor Isaac Adewole has announced the death of one confirmed Lassa fever victim at National Hospital Abuja.

The Minister who made the announcement at the National Hospital Abuja this evening also called on Health workers at all levels to be more vigilant and look out for patients with symptoms of Lassa fever.The Minister has directed that all primary and secondary contacts of the victim should be tracked including the staff of the private hospital in Kubua where the deceased was first managed for one week and subsequently became unconscious before referral to National Hospital.He also advised that family members should report at the nearest hospital if anyone has fever for more than two days The Minister, however called on the residents of Abuja not to panic but to maintain high level vigilance and present themselves for test if they feel unhealthy or they feel symptoms of Lassa fever which include high fever, stooling, tiredness, vomiting, etc., adding that self-medication should be avoided at this period. The Medical Director of the Hospital Dr Jack Momoh who briefed the Minister this evening during his visit to National Hospital, said that the patient was brought in unconscious from a Private Hospital in Kubua where he was admitted for 8 days. The 33 year old newly married lived in Jos Plateau but came to see a family member in Kubua because of his illness. He however died within 24hours of presentation at the National Hospital.The latest death from Lassa fever brings the total number of deaths to 43 in the country (from 10 states). Boade Akinola (Mrs)Director Press, FMOH,FOR: Hon.Minister.

Between Slaughtered Cattle and Insecurity in Nigeria