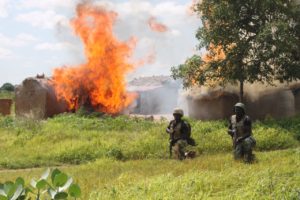 The Theater Commander made the disclosure today at a media briefing in Maiduguri.

Represented by his Deputy Commander, Major General Lucky Irabor, General Umaru said that the troops had also recovered many AK47 rifles, ammunition, Anti-Aircraft Gun, RPG, GMPG, IEDs, vehicles and motorcycles among other items from the terorists.

He said: “our troops conducted a fighting patrol at Afe, Kudiye, Souma, Dikwa Mijigeta, Mida villages of Borno state. During the operation our troops come in contact with Boko Haram terrorist at Kudiye and Mijigete were 370 hostages were rescued and brought to IDP camp in Dikwa and 3 rifles and 41 motorcycles were destroyed.”

The troops also cleared some Boko Haram hideouts in Wala, Tirkopytir and Durubajuwe in Gwoza local government area, where they recovered GMPG, locally made Dane gun and a grinding machine.

In Huyum in Askira/Uba Local Government Area, the terrorists sighting troops abandoned their families behind which include five women and 12 children and were currently undergoing interrogation

General Hassan Umoru commended the efforts of the troops and renewed call for the troops and the public to be more vigilant and security conscious at all times, especially at checkpoints, worship centre, markets, motor parks and schools.