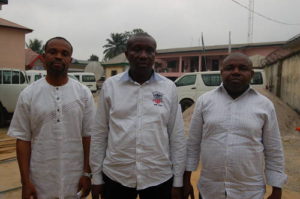 The Economic and Financial Crimes Commission, EFCC, on Monday, February 8, 2016, arraigned the  trio of Joseph Lah Leh, Nwinunu Sorbari and Emenike Henry before Justice U.N Agomoh of the Federal High Court sitting in Port Harcourt, Rivers State on a five- count charge bordering on conspiracy, forgery and obtaining money by false pretence to the tune of N4, 500,000.00(Four Million, Five Hundred Thousand Naira).
The petitioner, Uzoma Obilor, Managing Director/CEO, Bikpak Limited, alleged that one of his business associates, Kenule Kukang, sometime in May, 2012, brought a proposal for getting contracts from the Niger Delta Development Commission, NDDC, and then introduced him to Lah Leh (the first accused person) who claimed that he could help him( Obilor) secure the contract.
Obilor further alleged that he was shown a tender, which Kukang, who also claimed to be a special assistant to one L.F.  Ntoue, his in-law and Board member representing Federal Ministry of Finance in  the NDDC, confirmed to be genuine.
Thereafter, Lah Leh allegedly demanded for N5million from Obilor to start the processing of the contract, which was paid in three installments of N2.5m, N2m and N500, 000 with a Standard Chartered Bank cheque No.00000151.
The petitioner further alleged that, after he had made the full payment, the first accused person, who was accompanied by Sorbari, the second accused person, gave him a contract award letter.
Worried by the incessant threats and harassment for more money  by the accused persons, the petitioner then visited the NDDC to verify the award letter, which was found to be fake.
However, all efforts by the petitioner to get back his money were unsuccessful.
The accused persons pleaded not guilty to the charges when they were read to them.
In view of their pleas, the prosecution counsel, M.T. Iko, asked for a trial date.
However, the defense counsel, O.C. Wechie, prayed the court to grant the accused persons bail.
Justice Agomoh granted the accused bail in the sum of N1, 000,000.00 (One Million Naira) each, with two sureties in like sum. One of the sureties must be a civil servant not below Grade Level 12, while the other must be a blood relation who must be verified by the prosecution and court bailiff.
Justice Agomo adjourned to March 15, 2016 for trial and ordered the accused persons to be remanded in prison custody pending the fulfillment of their bail conditions.
Wilson Uwujaren
Head, Media & Publicity