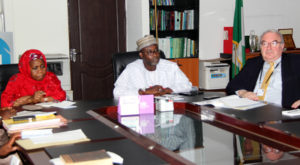 The Government of Nigeria and Germany are discussing on possible areas of partnership on Dam development in the country to boost power supply. This was when the German Trade Delegation met with the Hon. Minister of Water Resources, Engr. Suleiman Adamu on Thursday 11th February, 2016 in his office.According to the leader of the delegation, Uwe Beckmeyer MdB, the purpose of the visit was to strengthen the cordial relationship between the two countries and to forge additional trade ties with Nigeria.Expressing his optimism, he stated that Germany has over 80 companies in Nigeria and are interested in scaling it up to 100 companies in the future if their trade mission to Nigeria succeeds. “Nigeria and Germany will continue to engage bilaterally on further steps to increase the scope of German business in Nigeria”, he explained.Speaking on the importance of the Water sector, Beckmeyer said that to boost agriculture and power supply of Nigeria, water must be taken seriously. “Water can be the backbone of agriculture and power. If the sun is not shining for solar energy, you can use water to generate it. Also, you can use water to boost the agricultural activities of the Nation with irrigation facilities of the sector”, he explained.In his response, the Hon. Minister of Water Resources, Engr. Suleiman Adamu restated the federal government’s willingness to open Nigeria’s economy to more foreign investors stating that the nation’s dams and irrigation facilities have both power and agricultural potentials in varying degrees that Germany can explore in their quest of renewable energy and small hydropower generation.The Minister pointed out that with the feasibility study, Dansi Hausa Dam situated in Adamawa state has the potential to generate about 300 mg of electricity and about 10,000 hectare of irrigable land to support agriculture. He added that the Kashimbilla multipurpose dam in Taraba state which is at about 90% completion has the potential of hydropower component of about 40 megawatts, irrigation potentials of about 2000 hectares of land and a capacity to contain 500 million cubic meter of water.Engr. Suleiman said that with the ongoing discussions shown so far by foreign investors in the Nigerian economy, Nigeria will soon become the economic hub of the continent. He added that the federal government will continue to provide the enabling environment for investors in the water sector.M. E. Umoh (Mrs.)Director of InformationFMWR