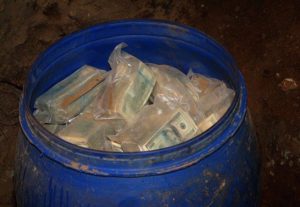 Citizens’ Initiative for Security Awareness (CISA), a civil society group engaged in creating and spreading security awareness among Nigerians, wishes to add a word of caution to the sensational stories in the media concerning investigations of some retired and serving military officers allegedly indicted in the ongoing corruption probes.

We frown at the unconscionable concoction of stories and unrelated pictures to tar certain officers in the media. Take for instance the story making rounds that $1m dollars was found in drums or in soak- away belonging to a certain officer, yet the soak-away has no sign of breakage nor were Nigerians shown the confiscated money. Just so to achieve the intention of demonizing the officers, the picture of drums containing US dollar belonging to the late Colombian drug kingpin, Pablo Escobar, which was unearthed by a Colombian farmer in 2015 are being circulated today in Nigeria as belonging to a Nigerian military officer indicted for corruption. Nigerians were also told of the former Military Assistant to Late Gen. Azazi and Sambo Dasuki, who is a serving Colonel whose house was allegedly broken and millions of dollars were allegedly found inside. This same officer is still in detention for more than 2 months yet no charge has been preferred against him, while the so-called millions of dollars found in his house is not authenticated.

A couple of days ago, Nigerians were treated with a report of public humiliation and arrest at the airport of a serving top Air Force officer by police men in mufti in spite of the pleadings and protestations of fellow generals that the senior officer is not running away but travelling abroad on official assignments. To us, this unnecessary bravado and play to gallery is uncalled for as it is capable of creating animosity between and among security agencies.

As a civil society group interested in galvanizing public support for the Nigerian military and other security agencies in the country, CISA is gravely worried about the implication of orchestrating the circulation of unproven stories of alleged corrupt practices by military officers. Much as we do not and can never support any act of corruption from any quarters, it is our firm belief that the current trend of bandying unsubstantiated, sensational stories in the media aimed at vilifying and demonizing people who may have served or are still serving the country to the best of their ability will not in the long run achieve anything other than the irredeemable destruction of the image and character of our military institutions. CISA believes that media trial of our top military officers, serving or retired, is an ill wind that will blow nobody any good.

CISA believes our military and security institutions and its officers must NOT be exposed to such public ridicules. We frown at the unrelenting profiling of the military as haven of corruption and officers as corrupt fellows when indeed none of the allegations have been proven or any of the indicted officers convicted by the judicial system.

We should all support the government in its War Against Corruption without dehumanising and discrediting individuals and institutions through false and sensational reports that can dent our national pride and reputation.