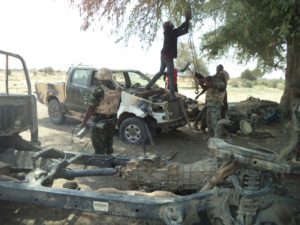 The troops also recovered 12 vehicles, 27 motorcycles, 9 AK-47 rifles, 2 Fabrique Nationale rifles, fabricated rocket bomb and a Sniper rifle. Other items recovered include 4 Dane Guns, solar panels and other household items. In addition to that, they also rescued 20 persons held hostage by the terrorists.

Unfortunately, 2 of our soldiers sustained gun shot wounds. The wounded soldiers have been evacuated to 7 Division Hospital where they are receiving medical care.

We wish to state here that buoyed with this unprecedented success, the troops morale is very high.

We would like to assure the public that the troops would continue to do their best to clear all the remnants of Boko Haram terrorists wherever they may be to successfully bring to an end the menace of the terrorists.