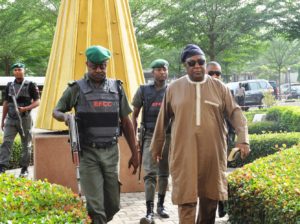 The Economic and Financial Crimes Commission, EFCC, on Monday, March 7, 2016 arraigned former Chief of Defence Staff, CDS, Air Chief Marshal Alex S. Badeh alongside Iyalikam Nigerian Limited before Justice Okon E. Abang on a 10 count charge bordering on money laundering, criminal breach of trust and corruption to the tune of N3.97 billion.
Badeh, while being the CDS, among other things allegedly abused his office between January and December, 2013. He used dollar equivalent of the sum of N1.4billion (One Billion, One Hundred Million Naira) from the accounts of the Nigerian Air Force to purchase a mansion situated at No. 6, Ogun River Street, Off Danube Street, Maitama, Abuja.
The offence is in contravention of Section 15 (2) (d) of the Money Laundering (Prohibition) Act, 2011 (as amended) and punishable under Section 15(3) of the same Act.
One of the counts reads:
“That you Air Chief Marshal Alex S Badeh (whilst being the Chief of Air Staff, Nigerian Air Force) and IYALIKAM NIGERIA LIMITED between 28th March and 5th December, 2013 in Abuja within the jurisdiction of this Honourable Court, did use an aggregate sum of N878,362,732.94 (Eight Hundred and Seventy-Eight Million, Three Hundred and Sixty Two Thousand, Seven Hundred and Thirty-Two Naira, Ninety-Four kobo) removed from the accounts of the Nigerian Air Force and paid into the account of Rytebuilders Technologies Limited with Zenith Bank Plc for the construction of a shopping mall situate at Plot 1386, Oda Crescent Cadastral Zone A07, Wuse II, Abuja for yourself, when you reasonably ought to have known that the said funds formed part of the proceed of unlawful activity (to wit: criminal breach of trust and corruption) of Air Chief Marshal Alex S Badeh and you thereby committed an offence contrary to Section 15(2) (d) of the Money Laundering (Prohibition) Act, 2011 (as amended) and punishable under Section 15 (3) of the same Act”
The first Defendant (Badeh) pleaded not guilty to the charges preferred against him, while the court relied on Section 478 of the Criminal Justice Act to enter a “not guilty” plea for the second defendant which is a corporation.
In view of the plea of the defendants, counsel to EFCC, Adebisi Adeniyi standing for Rotimi Jacobs, SAN, prayed the court to fix a date for trail and remand the accused in prison custody.
Counsel to the first defendant, Samuel Zibiri, SAN, on the other hand, told the court that, he had a pending bail application dated March 2, 2016 and filed March 3, 2016.
He prayed the court to admit the defendant to bail.
Justice Abang, in turning down the application said, “the motion is not competent as it was filed before arraignment.”
According to the judge who made reference to a decision of the Supreme Court in a similar matter, “a court will have jurisdiction of a defendant upon arraignment and not before arraignment.”
Consequently, he ordered the accused person to be remanded in Kuje prison  and adjourned to March 10, 2016 and March 14, 2016 for hearing on the bail application and commencement of trial respectively.
The judge also warned that he would not entertain unnecessary interlocutory applications until the substantive matter is concluded.
Wilson Uwujaren
Head, Media & Publicity