Home Economy Synergy Among The Three Tiers Of Government Base Of The Success Of... 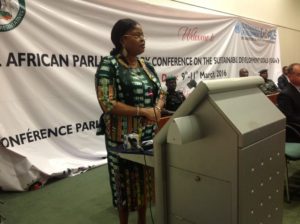 The newly appointed Senior Special Assistant to the President on Sustainable Development Goals (SDGs), Princess Adejoke Orelope – Adefulire has pointed the importance of synergy amongst the three tiers of government as the base for a successful implementation of the SDGs.She pointed this while delivering goodwill message at the opening of the “All African Parliamentary Conference on the SDGs” held in Abuja recently.Princess Adejoke pointed that the strong affirmation of support by Mr. President on the implementation of the SDGs offers a unique opportunity to complete the unfinished business of the MDGs and address the economic, social and environmental aspects of sustainable development. She added that the new development agenda is in line with the commitment of the this administration to improve the lives of the poor and fast track the country’s development.The SSAP pointed that for the SDGs to succeed, strong political will, high level of support from parliament, resource availability, local ownership, incentive based interventions as well as synergy among the three tiers of government are indeed needed.She praised the role of the legislators in the development process, stressing that, African Parliaments have key role to play in achieving the SDGs through their constitutional functions.While delivering his goodwill message, the speaker of the House of Representatives Hon. Yakubu Dogara, represented by the Deputy Speaker Hon. Yusuf Sulaiman Lasu said the conference is the right attempt to seek the right partnership for the implementation of the SDGs. He urged the parliamentarians to return to their countries and re-strategise, passing relevant laws for the successful implementation of the SDGs.The Director, United Nations SDG Action Campaign Mr. Michell Toomey, while congratulating the new SSAP on her appointment, stressed the continued UN support for the smooth implementation of the SDGs. He maintained that ‘the 17 SDGs Goals are the people’s Goals and their voices must be respected’. He called for active participation of all stakeholders.The conference was attended by parliamentarians from Nigeria, Ghana, Kenya, Zimbabwe, Sierra-Leone, Senegal, The Gambia, Togo, Madagascar and Niger Republic among others.Janet McDickson (Mrs),AD Information and Head, OSSAP-SDGs Communication Unit.