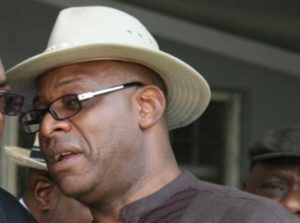 Justice Rita Ofili- Ajumogobia in a landmark ruling convicted the former DG on 25 of the 27-count charge bordering on alleged contract variation, bid rigging and awarding contract above his approval limit which violates the provisions of the Public Procurement Act, brought against him by the Economic and Financial Crimes Commission, EFCC.

Omatseye was first docked by the anti graft agency in February 2011 beforeJustice Binta Nyako and later re-arraigned on an amended 27-count charge before Justice Rita Ofili – Ajimogobia in January 2013 after Justice Nyako was transferred out of the Lagos division of the court.

Some of the charges against Omatseye read:

“That you Temisan Omatseye whilst carrying out your duty as the Director-General of the Nigerian Maritime Administration and Safety Agency (NIMASA) on the 16th Day of February, 2010, split tenders for, and approved, three contract awards to Wabil Nigeria Limited, to wit: Contract Nos: (a) NIMASA90127/02/2010 (b) NIMASA90137/02/2010 (c) NIMASA90139/02/2010 for supply office accessories, to enable you evade your official limit of monetary thresh hold of contract approval, and thereby contravening the provision of Section 58(4)(d) of the Public Procurement Act, 2007 and punishable under Section 58(5)(a)(b) of the same Act.

“That you Temisan Omatseye whilst carrying out your duty as the Director General of the Nigerian Maritime Administration and Safety Agency(NIMASA) on the 29th day of January, 2010, split tenders for, and approved, two contract awards to Franxeel Limited wit: Contract Nos: (a) NIMASA90084/01/2010 (b) NIMASA90085/01/2010 for supply of computer accessories, to enable you evade your official limit of monetary thresh hold of contract approval, and thereby contravening the provision of Section 58(4)(d) of the Public Procurement Act, 2007 and punishable under Section 58(5)(a)(b) of the same Act”.

He had pleaded not guilty, paving the way for trial to commence. In the course of trail both the prosecution and the defendant called several witnesses.

On March 14, 2016 the parties adoptedtheir final addresses.  The defence counsel, Edoka Onyeke had urged the court to dismiss the case against the former NIMASA boss on the grounds that, the prosecution has not been able to prove its case beyond reasonable doubt. But prosecuting counsel, Godwin Obla, SAN expressed confidence that the 27-count charge against the defendant has been proved beyond all reasonable doubt and prayed the court to find the defendant guilty as charged.

According to Obla, 25-counts of the charges preferred against Omatseye dwelt on the approval of contract above the threshold level and the other two counts dealt with bid rigging.  He also said that, contrary to existing regulations, contract was awarded to a company that was the highest bidder and which was not even pre-qualified for the contract.  After listening to all the submissions, Ajumogobia adjourned the matter till May 9, 2016 for judgment.

However judgment was deferred on May 9, following the transfer of the trial judge to the Illorin division of the court. Consequently a new date of May 20 was fixed for judgment.

Before delivering her judgment today, Justice Ajumogobia reviewed the trial and came to the conclusion that the prosecution successfully proved 25 of the 27 counts brought against Omatseye. She therefore found him guilty as charged. Before pronouncing the sentence, the defence counsel, Onyeke urged the judge to tamper justice with mercy. Justice Ajumogobia then sentenced Omatseye to five years imprisonment on each of the counts.

She added that the sentences were to run concurrently.

The court also ordered that Omatseye should be dismissed from the Public Service.