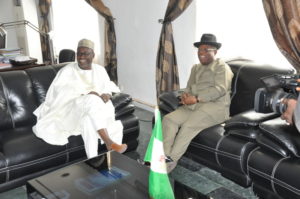 The Honourable Minister of Water Resources, Engr. Suleiman H. Adamu,FNSE has said that Nigeria would do everything humanly possible to stop open defecation by 2025.
The Minister stated this when the Executive Governor of Ebonyi State, His Excellency  David Nweke Umahi paid him a courtesy visit on Tuesday 7thJune, 2016 in his office.
Adamu said that water and sanitation is key to achieving the SDGs as they both cut across all the goals of the SDGs. He added that the Ministry would soon be launching a National Programme on Water and Sanitation aimed at meeting up with the SDGs goals.
The programme when launched would be cascaded to all states of the federation, rural communities, schools and markets. He said that it is the responsibility of the states and local government authorities to provide domestic water supply to their communities, while the federal government would intervene so as to meet the set targets of the SDGs.
He however promised the Governor that Ebony State would be given assistance on the state water projects as this would not only provide food for the people but jobs as well. He said that the governor’s letter is receiving good attention as he had directed the Directors in charge to expedite action on the matter.
In his response, the Governor expressed his appreciation and promised that Ebonyi State would do its quota to see that the collaboration in scaling up access to water and ending open defecation succeeds.
Margaret E. Umoh (Mrs.)
Director (Information & Public Relations) FMWR