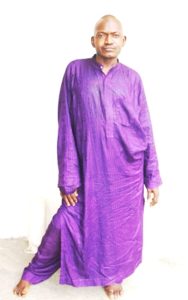 The Nigerian Customs Service (NCS) has arrested one of most notorious fraudsters involve in online advertising scams on non-existing vacancies in government agencies.
The suspected kingpin whose real name was given as Abubakar Rilwan had been declared wanted by some security agencies in the country before his arrest.
A top customs officer stated: “Abubakar Rilwan, who is evidently disabled is one of the principal actors and suspect in a job/auction scam syndicate. Whatever he lacks in physical ability, he makes up for in his exceptional ability to manipulate and swindle his victims.
“He has duped desperate job and auction seekers to the tune of over 20 million naira, sometimes using the services of lawyers.
“In one of his escapades, he collected money from 7 (seven) job seekers in Taraba State, issued them fake appointment letters, and caused them to travel all the way to Bayelsa State for fake training. They got there before realizing they were duped.”
While Rilwan is currently in the custody of the Nigeria Customs Service undergoing further investigation, other security agencies that had declared wanted for related offences.
The spokesperson of the Nigeria Customs Service, Mr. Wale Adeniyi confirmed the arrest.
By PRNigeria
PRNigeria encourages institutions to be transparent in their information management as it provides news items from authoritative sources for free use by the media