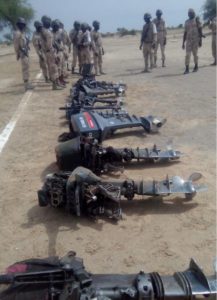 Clearing operation to flush out the fleeing Boko Haram Terrorists (BHT) from the Multinational Joint Task Force (MNJTF) Area of Responsibility (AOR) continues to yield positive results. The troop of Sector 1 with its relocated Tactical Headquarters in Makary, Northern Cameroun intensifies clearance operations along the borders between Nigeria and Cameroun to block the fleeing terrorists. Recently, the terrorists in attempt to escape the firepower of MNJTF troops were migrating to some villages adjacent to the Sector 1 AOR.
Acting on credible information, the troops successfully cleared the six villages occupied by the terrorists, seized some logistic equipment and apprehended Twenty Four suspected Boko Haram accomplices.
The cleared villages are SAGUI, KIRTA-WOULGO, GORE MAHAMAT, GORE BLANGAFE, CHAUGRY and DAMBOURE. The recovered equipment are 20 x Outboat Engines, 2 x Motorcycles, 9 x Generating sets, 1 x Solar panel, 1 x Grinding machine, 1 x Handset, Flags  and some Islamic religious books. However, one soldier was killed by Improvised Explosive Device (IED) and another fatally wounded and lost his one of his lower limbs during the operation.
Addressing the troops during his operational assessment tour in Makary, the Commander, MNJTF, Major General Lamidi Adeosun commended their display of exceptional bravery and charged them to keep up the good work, while encouraging the traditional authorities in the area to set up vigilante groups to compliment the effort of the security forces.
Equally, on a similar visit to Sector 2 troops (Chad) at their temporary Harbour Area in Littri, the Commander expressed delight for their initial operational exploits, which despite difficult terrains and other operational challenges were able to clear terrorists from some villages on the Lake Chad Islands. He couraged them to maintain their high fighting spirit and keep up the momentum of the operation despite the challenges of the slow go terrains.
Colonel Muhammad Dole
Chief Military Public Information Officer
MNJTF
PRNigeria encourages institutions to be transparent in their information management as it provides news items from authoritative sources for free use by the media