.“The Nigerian community at large will be the ultimate beneficiaries of the additional 450 MW of Power as part of our Incremental Power project”, he says 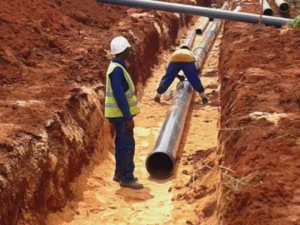 As construction work progresses at the Azura Power Plant in Benin, Minister of Power, Works and Housing, Mr. Babatunde Fashola SAN, has listed the positive spinoffs that would result from such projects across the country saying that current efforts by government to achieve Incremental Power would galvanize and boost the national economy.

Fielding questions from newsmen after a tour of the facility, which is largely a private sector initiative, Fashola expressed pleasure at the progress of work on site and said spinoffs such as supply of materials by, and employment of members of the local community were positive signs that the efforts of government are impacting positively on the people.

The Minister, who recalled that the approvals and agreements required by the private companies to source for funds for the project could not be signed for more than one year before the current administration assumed office, commended President Muhammadu Buhari for finally signing the required approvals which enabled the investors to commence construction. He added that since construction work started, there has been visible positive impact especially on the host community.

Speaking about the positive spinoffs of the project on the host community, Fashola described it as “a very strong and positive sign of the impact of the decision of Mr. President”, who, according to him, “directed that all the approvals necessary in carrying out this project be given immediately after he took office”.

“This project has been awaiting government approvals for over a year and couldn’t start. So that is positive”, he noted adding that the local community was benefiting from existing contracts to supply sand used for construction and other materials as well as sales of food stuff by local food vendors .

Fashola commended the contractors for the speed of work at the site, declaring that “Ultimately while all these are going on, we are expecting that this community, the Nigerian community at large, will be the ultimate beneficiaries of the additional 450 MW of power which will help to add to our Incremental Power project and from there to others”.

“So, in a nutshell, I am pleased with what I see, the project is on course in terms of time lines. Actually I am told they gained three weeks ahead of their schedule and I hope the rains will allow them keep it up and continue”, the Minister said adding, “There have been interventions here and there, Mr. President and the Vice President are committed to seeing this project come to fruition and add its contribution to our national power supply.”

Giving more details on the Azura Project, Fashola, who reiterated the fact that the immediate past administration did not sign the approvals and guarantees the contractors needed for almost two years, said using Azura as the test case of investments coming into the power production, the spinoffs would add value to the economy.

“It was this administration under President Buhari that finally signed the approvals and the agreements they needed to raise money, and once that happened, what did you see? Construction took place, an economy was receiving value, a community began to benefit, because all the sands and all the materials being used are being sourced locally”, the Minister noted adding that the host community was benefiting because of that intervention.

According to the Minister, “It is not just the community selling building materials and all that but it is also that people, their sons and daughters are going to the site and are able to say “Ï am going to work”, adding that the economic activities were just the beginning of the good things to come from the project.

On the need for government intervention in the project, Fashola recalled that during the piling process, the contractors ran into a problem of how to control the heat in their piles and needed to import a special type of cement, adding that it was only the government that could give that kind of approval, which he said has been given.

Noting that the required cement has arrived and the project is on-going, Fashola declared, “And we are doing this at many levels. Government is intervening through the Central Bank in the liquidity challenges across the board, from generation to gas to distribution and so on”. “I think people should just be patient. Every day, I see the road clearer, I see tomorrow better, I see Incremental Power”, he added.

The Minister, who explained that the meeting in Benin was part of the on-going collaboration with all the power sector players, added, “We are in Benin this month and so many things happen as a result of these meetings. It helps me see all of our power assets in whatever city that the meeting is holding. Last month we were in Kano assessing distribution assets in Kano and the satellite centres.

This month we are in Benin; we are being hosted by Benin Distribution Company. The Azura Power Plant, which he said would deliver 450MW of power to the National Grid, would hopefully come on stream sometime in 2018. He however added that at the Ihovbor Power Plant which was finished in 2014, only one out of the four turbines was working because of gas shortages.

“So instead of 450 MW of power I think it is delivering about 109MW”, he said while adding that it was important for Nigerians to know what the capacity was and what the current reality was because of gas shortages.

Decrying the reasons for the shortage of gas, the Minister, who said there are two phases of gas shortages, explained further, “Not all of our gas infrastructure is fully delivered and as if that isn’t enough, we are now sabotaging what is not enough”.

“That is a tragedy but we will overcome it. That is part of the reason why I am taking first hand assessment of what is on ground while we are running repairs to stabilize the system”, he said.

Drawing attention to the transmission substation at the site, Fashola, who described the TKV lines as transporters of power across the country, added, “So far so good; seeing all the transmission lines work well, getting them to expand their capacities, getting gas to power plants like Ihovbor, completing power plants like Azura are all the story of our target of getting Incremental Power”.

He said Azura was a private development with government support in terms of guarantee given by the present administration adding that the hosts of the meeting, the Benin Disco, was largely owned by the Private Sector and only partly owned by government.

The Minister said the meeting signified the coming together of many different sides of the power value chain including operators, private sector, public sector while galvanizing the economy and generating employment adding, “All of these people are employed somehow or the other within this industry. The bigger this industry grows, the bigger it employs many more men, many more women, engineers, all sorts of people. So I remain optimistic that we will overcome these challenges”.

While on a brief courtesy visit to the Edo State Governor, Comrade Adams Oshiomhole later, Fashola in stating his mission in the state, expressed joy that the Azura Power project under construction was impacting on the local communities in terms of economic opportunities for the locals while being compliant with environmental standards of construction adding that government was eager to see it delivered on time and on schedule.

“We are expectant that this will be so, to give us additional power to improve on our Incremental Power to the state”, he said expressing regrets, however, that the Ihovbor Power Plant was currently suffering from gas shortages. As a result, only one out of the four turbines installed that could give a total of 450MW at full capacity was being fired because of gas inadequacy.

“We also took stock of the project – the transmission sub-stations at Ihovbor to evacuate power will be of very good use”, he said adding that he was confronted by some consumers in Benin City who protested the quality of service they were getting but assured them that everything was being done to remediate the situation.

Commending the efforts of the local DisCo in the state, Fashola, who also noted the challenges facing them such as issues of bill payment noted that there were also efforts that have been made in terms of expanding support for the transmission station, which he described as the biggest in history, adding that the scope for expansion was unlimited.

Describing his visit to Benin as “essentially a facility measurement tour and also to build on the progress that is going on”, the Minister said the station was now being supported from Akure via Ughelli and also from the recently completed station in Awka adding,  “I think there are many more like that going on”.

Thanking the Governor for the opportunity to visit, Fashola, who noted the impressive performance of  Governor Oshiomhole in the last eight years expressed hope that his successor would continue from where he would stop and not start from the beginning.

“I was telling the people in the bus that I wish they had seen the Airport Road eight years ago when you took over and how impressive and competitive those road networks now look, although you and I will be the first to admit that the work never ends; and I hope as you wind down whoever the people of Edo State ultimately choose to succeed you will be able to start from where you stop and not to start from where you started”, he said.

Responding, the Governor commended Fashola’s tenacity and hands on approach in tackling the issues in the three critical sectors of the Ministry which he superintends adding that as the “Captain” during his (Fashola) tenure as Governor, he was confident that the Minister would ultimately deliver on his assignments.

The Governor however appealed for patience on the part of the citizenry noting that the rot that had set in for over 16 years before the advent of the current administration, especially in the power sector, would take time to address and resolve.

TO THE HON. MINISTER