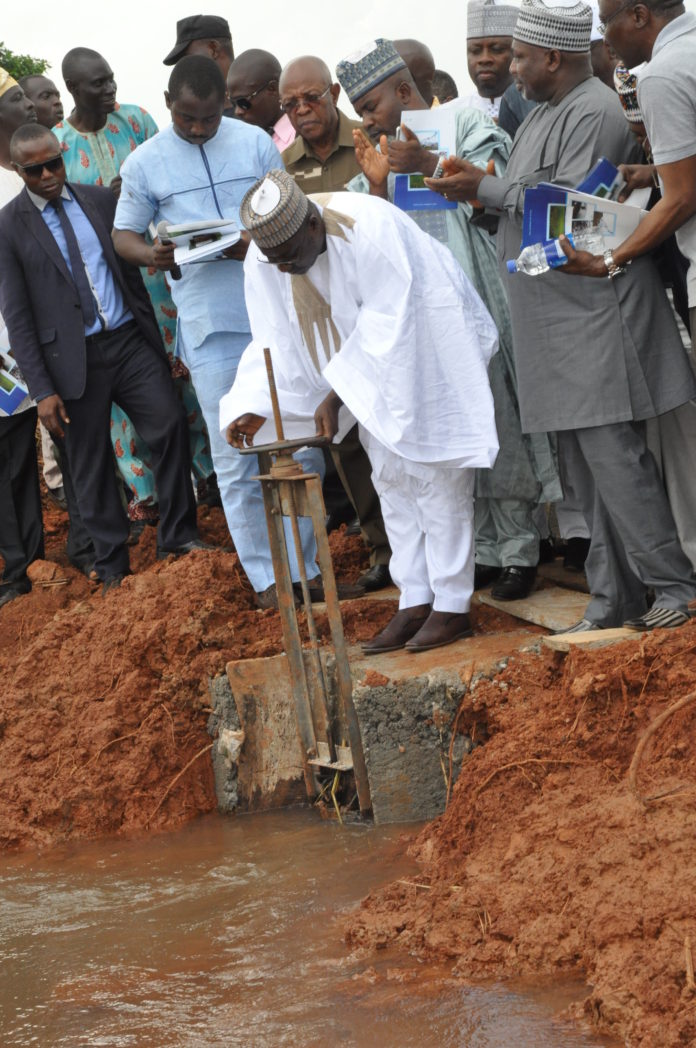 …Flags off of first Graduates Youths Empowerment Scheme in the country
The Federal Government of Nigeria has reassured Nigerians of its determination and commitment in meeting with its change agenda in providing food and jobs for the teeming population of the country as it flags off the first Graduates Youths Empowerment Scheme in the country.
Flagging off the empowerment scheme in crop production and fish farming in Kampe Irrigation Scheme on Thursday 28th July, 2016 in Ejiba, Kogi State, the Honourable Minister of Water Resources, Engr. Suleiman H. Adamu,FNSE, said that the scheme would be driven by the Federal Ministry of Water Resources in conjunction with the 12 River Basin Development Authorities (RBDAs) across the country and would be modeled after the Songhai Farm Nigeria Ltd.
The scheme according to the Minister is a continuous one in batches of 50 and would be cascaded to all the 109 senatorial districts of the country; this would create jobs for over 5,450 Nigerians.
Adamu said that the Federal Government is committed to the successful implementation of the scheme across the country through the RBDAs as it would promote sustainable water resources and irrigated agricultural development which will ensure a national food security, employment generation and others.
“As a way of facilitating the smooth take off of the scheme, Government intends to assist the RBDAs to procure new equipment of the scheme”, he said. He added that the RBDAs should as a matter of policy adhere strictly to the terms and conditions contained in the MoU  that was signed between the Federal Government and the Songhai Farm Ltd.
He charged governments at different levels to key into the scheme in order to utilize the great significant investment government is putting in. Also, he called on the beneficiaries to ensure that the potentials inherent in the scheme are properly utilized for their socio-economic advancement.
The Managing Director of Lower Niger River Basin Development Authority, Engr. Niyi Jimoh Afolayan said that the RBDAs has been repositioned and restructured by Federal Government and can now serve as veritable vehicle to drive the scheme to success.
He explained that the Kampe Irrigation Scheme of the Authority was chosen as a flag-off point because of the available land of about 7,200ha of which about 1,600ha is fully developed with necessary irrigation facilities and a market centre to provide sales outlet for the produce.
Margaret E. Umoh
Director (Information & Public Relations)
FMWR