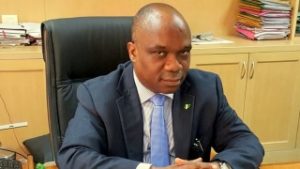 The newly appointed Permanent Secretary of the Ministry of Foreign Affairs, Ambassador Sola Enikanolaiye was sworn-in by President Muhammadu Buhari on Wednesday, 10 August 2016.

He has hit the ground running as the Administrative Head of the Ministry by holding inaugural meetings, on how to move the Ministry forward and to reposition it to deliver on its mandates of managing Nigeria’s Foreign Policy. He met separately with the Directorate Cadre Officers and the rank and file of staff in a single day. He has also granted audiences within 24 hours of resumption of office, to two sets of Envoys namely a team of Head of Missions of Netherlands, Australia, Malaysia, Belgium and Ukraine, and the Charge d’Affaires a.i of the Embassy of the United States of America, Ambassador Tibor P. Nagy.

As a career diplomat, Ambassador Sola Enikanolaiye’s path had crossed with the CDA of the United States, as both of them had served in Addis Ababa, the diplomatic capital of Africa. During the audience, Ambassador Tibor Nagy eulogized the excellent diplomatic relations between Nigeria and the United States. He expressed his desire to play a significant role in promoting the existing cordial bilateral relations.

In his response, the newly-appointed Permanent Secretary of the Ministry of Foreign Affairs, Ambassador Sola Enikanolaiye attested to the commendable role that the United States played in promoting democracy in Nigeria, specifically the shuttles embarked upon by the United States Secretary of State, Mr. John Kerry before the 2015 General Elections and also his esteemed presence at the inauguration of President Muhammadu Buhari’s administration on 29th May, 2015.

Worthy of mentioning in the excellent bilateral relations of the two nations is the increasing high-level exchange of visits. As it would be recalled, there was a Nigeria-United States Bi-National Commission (BNC) meeting in Washington D.C, USA, led on the Nigerian side by the Honourable Minister of Foreign Affairs, Mr. Geoffrey Onyeama in March 2016. In the same vein, the Deputy Secretary of State of the United States, Mr. Antony Blinken led the United States’ delegation to the 2nd Regional Security Summit hosted in Abuja in May 2016.

Earlier in the year, the Permanent Representative of the United States to the United Nations and a Cabinet Member of President Barrack Obama’s administration, Ambassador Samantha Power had visited Nigeria alongside other member states of the Lake Chad Basin Commission (LCBC).

During the visit, she announced that the United States is committed to providing Forty Million dollars ($40,000,000) to support humanitarian needs in the North East Nigeria, and other affected regions in Chad and Cameroon as well as training on countering Improvised Explosive Devices (IEDs) for Nigeria and to provide technical assistance for data on the IDPs, especially orphaned children.

In demonstration of its commitment to combating terrorism and rehabilitation of victims, the United States has donated millions of dollars for the procurement of relief materials for the IDPs. It is already in the public domain that the USA, through its Agency for International Development (USAID) will provide Thirty-Seven Million Dollars ($37,000,000) worth of humanitarian assistance for the victims of Boko Haram insurgency.

Both sides at the meeting with the US Envoy agreed to work assiduously towards uplifting bilateral relations for the greater benefit of their peoples.

Why I Re-Appointed Kashifu Inuwa as NITDA Director General – Buhari

FG to Begin Implementing PMS in Civil Service in 2023