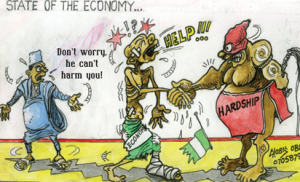 The Federal Government has deducted a total sum of N32bn from allocations of states from the Federation Account in the month of April 2016 for different loans they incurred.
In a report by the Economic Confidential, the economic intelligence magazine, it appears Osun state is worse hit by the development and ranks number one, as its allocation for the month of April 2016 totaling N2.030 billion was wiped away by a deduction of N2.391 billion leaving a deficit of N361 million to be paid in the subsequent month by the state, and this represents a whopping 117.8 percent of the total allocation due the state from the federation account.
This means that Osun state had nothing to take home for the month of April, 2016, as other means of survival had to be adopted to keep the ship sailing for the people of Osun State.
Osun State is followed in the mind boggling deduction conundrum by Bayelsa state with a total deduction of N3.207 billion out of an allocation of N4.812 billion for the month of April, 2016 representing 66.66 percent of the total allocation.
Others are: Cross River state with a total deduction of N1.405 billion, Ogun state, N1.185 billion, Plateau State, N1.248 billion and Ekiti State with N1.067 billion all representing 63.46 percent, 57.20 percent, 56.52 percent and 55.33 percent respectively within the period under review.
From the investigation, not less than N3.078 billion of the total amount was deducted for bail-out funds granted the states by the Federal Government. At least eight states had no deductions on bail-out funds for the month of April 2016. The states: Akwa Ibom, Anambra, Jigawa, Kogi, Lagos, Rivers, Yobe and the Federal Capital Territory did not collect the bail-out funds from the federal government or appropriate time for the deduction have not fallen due and are yet to commence.
Meanwhile, from the schedule of deductions obtained and computed by the Economic Confidential, the deductions from the states also includes debts on AMCON loan, Commercial Agric Credit Scheme, Bond Issuance Programme, Contractual obligation, and deduction from Excess Crude account. Others are: Refund/Payment arrears of derivation, foreign loans, special intervention/flood management project, the national fadama project and reconstruction of commercial bank loans into FGN bonds apart from bail-out funds.
See the two table in the attachment!
Note: Economic Confidential is a sister publication of PRNigeria
PRNigeria encourages institutions to be transparent in their information management as it provides news items from authoritative sources for free use by the media