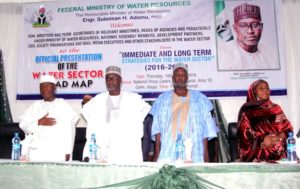 The Federal Government has launched and presented the Water Resources Road map tagged, “Immediate and Long Term Strategies for Water Sector (2016-2030) on Thursday 18th August, 2016 in Abuja.
The Road map which was graciously approved by Mr. President recently was presented to the general public by the Honourable Minister of Water Resources, Engr. Suleiman H. Adamu, FNSE, who stated that it would tackle the many challenges in the sector and also open up opportunities in the sector.
The Minister said that the Road Map encompasses some major programmes/projects that would drive the sector and this includes amongst others; development and implementation of a national irrigation development programme (2016-2030) to boost food production, identification of dams with hydro electric power potentials for development, development and implementation of a national water supply and sanitation programme to attain the sustainable development goals (SDGs) and development of a blueprint to strengthen the river basin development authorities as enablers for food security and socio-economic development.
“To actualise the Road Map, we have identified a detailed implementation plan, the execution of which is now fully on course”, he said.
Continuing, Engr. Suleiman said that the Ministry is in strong collaboration with Federal Ministries of Agriculture and Rural Development, Power, Justice, Finance, Budget & National Planning, Environment, Health, as well as Infrastructure Concession and Regulatory Commission (ICRC), Nigerian Sovereign Investment Authority, Bureau for Public Enterprises, State Governments and other Stakeholders.
“I am confident that implementation of the Road Map will be accelerated as we move into the third quarter of the year and beyond”, he said.
In his remarks, the Hon Minister of Agriculture and Rural Development, Chief Audu Ogbe said for the nation to be able to feed itself, all hands must be on deck to ensure all round season farming through irrigation.
In this regard, he said the Federal Government would be developing about 10 earth dams in every state of the federation including the FCT so that whether rain or not, we will be able to produce food for the ever increasing population.
Earlier, in her welcome address, the Permanent Secretary of the Ministry, Mrs. Rabi S. Jimeta, mni, stated that the essence of the Road Map presentation underscores the importance of the water sector in our life.
According to her, water is life and in order to give life to the teeming population of our dear country, we must adhere to the recommendations of the Road Map.
“The current National access to water supply in 2015 is 69%. This implies that 31% or 52.7 million of Nigerians do not have access to water supply”, she said.
It is therefore imperative to change the trend to achieve 100% access to water supply by the year 2030 when the population is estimated to grow to about 257 million.
Mrs. Margaret E. Umoh
Director (Information & Public Relations)