In the course of the operation, 5 militants that attacked the troops were killed in action, while numerous others were injured and 23 suspects were arrested.

The operations which was conducted yesterday 26th August 2016, was carried out by the Special Forces at the militants camps. 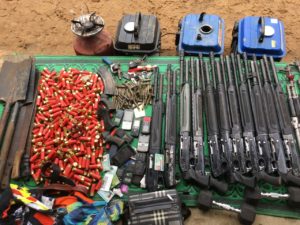 The troops also recovered an abandoned Engine Boat left by the fleeing criminals.
You are kindly requested to disseminate this information to the public through your esteemed medium.