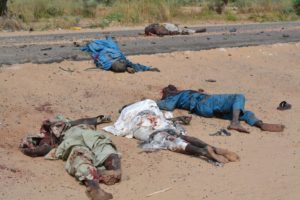 Troops of Operation LAFIYA DOLE deployed at a checkpoint in Gubio, Gubio Local Government  Area of Borno State at about 9.15am this morning, foiled a suicide attack on Gubio town by 8 Boko Haram terrorists.

The suicide bombers who came in a Bedford pick up vehicle primed with Improvised Explosive Devices including suicide vests, attempted to force their way through the checkpoint but met stiff resistance from troops who insisted that the vehicle be thoroughly checked. The suicide bombers refused and blew up themselves by detonating one of the suicide vests killing all the 8 Boko Haram terrorists on board.