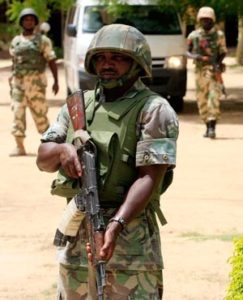 Ex PYTHON DANCE is not targeted at any individual or group of people. It is purely a Command Post and Field Training exercises as a way of enhancing troops’ preparedness across spectrum of contemporary security challenges peculiar to South Eastern Region.

For emphasis and clarity, Ex PYTHON DANCE is not targeted at MASSOB/IPOB or any individual or group. It is only a Field Training Exercise that is designed to where necessary dovetail into real time activities such as Anti-Kidnapping drills, Patrols, Raids, Cordon and Search, Check Points, Road Blocks and Show of Force. The Exercise is multi agency in nature and execution as Para-military organizations such as elements of Nigerian Police Force, Nigerian Security and Civil Defence Corps, State Security Services and Federal Road Safety Commission would collaborate to ensure the overall success of the Exercise. This is with the aim of checkmating the anticipated rising wave of crimes usually prevalent during the Yuletide period.

Recall that in line with the constitutional mandate of the Nigerian Army to carry out exercises in aid to civil authority, the Chief of Army Staff directed on the conduct of Command Post and Field Training Exercises as a way of enhancing troops’ preparedness and agility across the spectrum of contemporary security challenges in various regions of Nigeria.

Consequently, exercises such as Ex SHIRIN HARBI were conducted from 17 – 19 April 2016 in 3 Division Are of Responsibility (AOR) to take care of the insurgency, cattle rustling and other sundry crimes in the North East Region. Similarly, Ex HARBIN KUNAMA was held in 1 Division AOR from 9 – 15 July 2016 to rid the North West Region of banditry, insurgency and cattle rustling among other menaces. Also, Ex CROCODILE SMILE was conducted by 2 and 82 Divisions from 5 – 10 September 2016 in the Niger Delta Region with an overarching aim of reducing incidences of illegal bunkering, Oil theft, sea piracy and other peculiar criminalities across the entire Region.
These exercises were in all standards successful. At the moment, there is sufficient commitment to ensure that Ex PYTHON DANCE would be far more successful.

Consequently, in the same vein, Ex has been planned for the South East Region from 27 November – 27 December 2016. The prevalent security issues such as armed robbery, banditry, kidnappings, herdsmen-farmers clashes, communal clashes and violent secessionist attacks among other security threats in the Region would be targeted.

Part of the itinerary of the exercise is a comprehensive Civil Military Relations line of operations that entails the provision of elaborate free medical services to selected communities in Abia, Anambra, Ebonyi, Enugu and Imo states. Also, other corps and services of the Nigerian Army like the Engineer Corp are tasked to deliver effective services in identified locations.

Members of the public are hereby requested to disregard the unfounded fear and allegations orchestrated by ill meaning individuals and groups that the Exercise is ‘a plot to kill IPOB Members’. This assertion is not only insidious and mischievous but is also devious and bunkum and should be disregarded please.