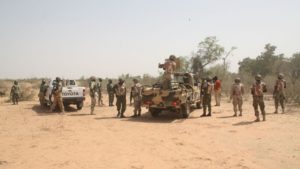 The troops of Operation LAFIYA DOLE have continued to clear several Boko Haram Terrorists (BHTs) in their hideouts and recorded huge successes. Since the last brief till today, own troops have moved deeper into SAMBISA Forest on many fronts.

In order to fully understand the operational setting, I will give you a general overview of SAMBISA Forest and some other parts of the Theatre as shown.

Since its commencement on 2 Nov 16, our troops have continued to make progress into the heart of SAMBISA Forest. The current incursion into the SAMBISA Forest is on various fronts.

The troops were briefed by the General Officer Commanding 7 Division prior the commencement of the offensive operations at the Assembly Area.

(1) On one of the fronts, on 30 Nov 16 the troops cleared GONERI before harbouring at GONI KURMI. While at harbour at GONI KURMI, the troops were attacked by the BHT with the hope of slowing down their push. The attack was successfully repelled with the BHT suffering casualties.

The troops recovered one AK 47 rifle, different calibres of ammunitions and magazines. The advance continued the following day and our troops successfully cleared ALAFA 1, 2 and 3 respectively before harbouring at BULA BELLO. On 5 Dec 16 the troops cleared all BHT delay positions before capturing NJIMIA.

At NJIMIA, our troops were attacked by the terrorists with AA guns and small arms fire. The attack lasted for about 30 minutes but was successfully repelled with BHT suffering heavy casualties in both men and equipment before retreating. However, one soldier and 2 CJTF were wounded. The soldier and one CJTF later died while being MEDEVAC to the hospital. Yesterday, at about 1600 hours, ISR identified BHTs massing up to attack own troops at Njimia. Own arty and air assets were used to engage the BHTs which led to the destruction of 4 x vehicles, a fuel tanker likely laden with IEDs. The air force also strafed and killed many fleeing insurgents. All the incidents are as shown.

On the second front, the troops advanced and cleared all BHT camps on their axis before harbouring at AMDAGA on the first day. At AMDAGA the BHT carried out a probing attack on our troops which was swiftly dealt with before the BHT retreated. The following day, troops cleared and occupied DURE and have been operating in the general area to intercept fleeing BHT.

The third axis moved from BITTA through SASSAWA to TOKOMBERE. The troops cleared all BHT camps on their axis and subsequently occupied blocking position towards SAMBISA S Shape. The special forces continued with the offensive and entered the River Line S Shape in the heart of the SAMBISA Forest. However, our troops on this axis stepped on BHT IED which was immediately followed by BHT attack. The attack was successfully repelled with several BHT killed during the encounter battle. Unfortunately, we lost a soldier and 9 others were wounded from the IED incident.

The dead and wounded soldiers were MEDEVAC by the NAF. The wounded are currently receiving treatment in our Hospital.

On the fourth axis, on 30 Nov 16, the troops cleared BHT camps at JEFE, NDENEMA and TURORI villages and subsequently harboured at KAZALAMARI village.

The advance continued the following day with our troops clearing the BHT from SAMBISA Gate 1. The troops successfully cleared and entered SAMBISA Gate 1 at about 1055 hrs. During the advance, own troops encountered IED and had contact with the BHT at GARIN DINYA village. A total of 19 BHTs were killed while 4 x AK 47 rifles and 8 magazines including other weapons of the BHT were captured. However, one officer, a soldier and 2 CJTF were wounded in action and were airlifted by helicopter for medical attention.

b. Subsidiary Operations. On 28 Nov 16, own troops conducted a clearance patrol in DOGON CHUKU general area. During the encounter with the insurgents, one BHT was killed, one wounded and others fled. The wounded, dressed in camouflage uniform, is receiving treatment and helping with useful information for the operation.

On 1 Dec 16 at about 1300hrs, own troops while conducting raid operation in DABAN GIWA, DABAN MASARA, GRATTE and other adjoining villages encountered BHTs coming out of the creek to mount their horses in the general area of GRATTE. A fire fight ensued and the BHT fled into the creeks with gunshot wounds. However, 32 of their horses died in the cross fire. An officer was wounded in action by grenade fragments during that operation.

c. Arrest of Fleeing BHT Members. The tenacity of own troops have led to the arrest of many fleeing BHT members. Some of the incidents include the following:
(1) On 28 Nov 16 at about 1555 hours, troops in conjunction with vigilante on recce/fighting patrol to KADAURI, YURAMTI and MANDANARI Villages intercepted and apprehended 13 BHT/BHT sympathizers and 51 of their family members at YURAMTI village.

(2) Also, on 29 Nov 16, troops deployed at BUNI GARI in conjunction with the vigilantes apprehended 14 BHT escapees made up of 3 men, 3 women and 8 children from GOROBCHA Village, North East of AJIGIN. One of the men was found to be involved in rearing of livestock for the insurgents.

(3) Similarly, on the same day at about 1320hrs, a BHT suspect, Alhaji Saidu Mohammed was arrested at HELMA JIBIR village in BIU LGA by own troops. The suspect was arrested with provisions, drugs which are mostly analgesics/sedatives and 31 wraps of weed suspected to be cannabis. Suspect has since been undergoing investigation.

(4) On 1 Dec 16 at about 0130hrs, own troops in conjunction with CJTF arrested 2 BHT suspects. The suspects were arrested while trying to move some items into the bush for BHTs. Items recovered include 5 packets of tramol, 4 new wrappers, 14 pairs of slippers, a world receiver radio, 5 packets of maggi star, 7 rolls of klin detergent, a packet of 1.5v battery, 2 packets of matches, 2 sets of children wears, a bicycle tube, tyre/free wheel, really extra tablet, kola nuts and 2 half bags of salt.

(5) On 3 Dec 16 at about 1100hrs, own troops in conjunction with local vigilante, while on fighting patrol along KAFA – GONIRI road arrested 7 confirmed BHT members. The arrested BHTs pretended to be IDPs in order to gain access into GONIRI so as to escape the current military operations. They were arrested with 50 women and children. They are currently in own custody giving useful information necessary for our operations.

(6) Likewise, on 4 Dec 16 at about 1345hrs, own troops in conjunction with local vigilante intercepted 5 men, 29 women and children heading towards GONIRI from KAFA.

The men were screened by the local vigilante and 2 of the men were confirmed to be BHTs. They have since been taken to custody and are undergoing interrogation. In all the operations, a total of 801 persons were rescued from the BHT from 23 Nov – 5 Dec 16. The breakdown is as shown.

d. Arrest of Cattle Rustlers. On 28 Nov 16, 4 persons and a teenager were arrested by own troops deployed at BULABULIN NGARNAN with 4 cows. Arrested persons have been handed over to the Nigeria Police.

e. Recovery of Arms from Kidnappers. On 2 Dec 16, own troops while on fighting patrol at the general area of GAMJI and KAFIN LEMU villages in NINGI LGA of BAUCHI State encountered some suspected kidnappers who engaged the troops in a gun battle. They were killed in the gun battle that ensued. The troops recovered several arms and ammunition which include 5 dane guns, a locally made pistol, some cartridges and charms.

g. BHT Ambush on Convoy. On 4 Dec 16 at about 1538hrs, the rear element of the civilian convoy being escorted by own troops was ambushed by fleeing BHT from ALAGARNO general area. Reinforcement from troops deployed at KOMALA and MUSAFANARI immediately mobilised to clear the ambush. After exchange of fire with the insurgents, own canter vehicle carrying a faulty motorcycle was carted away, while a civilian was injured and has been stabilized. Also, a white Hilux vehicle in the convoy was carted away while a BHT buffalo gun truck mounted with Anti-Air craft gun and spare barrel were captured by own troops. One soldier is currently missing following that encounter.

h. Escort Duties for Humanitarian Agencies. In the last 2 weeks, our troops have so far provided 38 escorts duties to several humanitarian agencies, staff and logistics within the Theatre. Troops have equally carried out patrols along the main road to ensure safe passage of logistics and commuters.

i. Additional Manpower and In-Theatre Training. During the period under review, 3 additional units were generated to improve on the manpower holding in the operations. Recently, additional special force battalion on completion of Theatre specific training was inducted. Furthermore, in-theatre training for troops is being conducted to boost the operational capacity of the Theatre.
j. COAS Goodwill Message. The COAS, within the period sent Goodwill Message to the troops titled “No More Time To Waste” which has been relayed. It has boosted the morale of troops.

Meanwhile, I can confirm to you that the BHTs are in total disarray due to our current military operations. Even the Maman Nur and Shekau factions clashed again recently which has further forced the BHT remnants at KAFA to disperse in confusion and desperation. Let me therefore, reiterate my earlier admonishment to the misguided BHT elements to give up their ignoble adventure. They are advised to surrender to the military or other security agencies without further delay.

I wish to re-assure them that they would be humanely treated in line with international best practices and in accordance with the International Humanitarian Law. Failure to do so would be unpalatable for them. I wish to equally state that plans have been concluded to give those who surrender, a purpose-driven rehabilitation which will make them lead a responsible life with other citizens.

I wish to once again commend the invaluable support and contributions of all stakeholders in this fight against insurgency in the North East.

To the members of the public, I urge you to remain vigilant and report any suspicious movement of persons and objects to the military or to the nearest security agencies.

The support of President C-in-C, President Muhammadu Buhari has been incredible. We in Operation LAFIYA DOLE are encouraged and remain grateful to His Excellency.

The direction given by the Chief of Army Staff Lt Gen TY Buratai in this operation is unique and we remain grateful. It truly reflects the support of the Chief of Defence Staff and the Chief of Air Staff as well as the Chief of the Naval Staff. The Governments and good people of Borno, Yobe and Adamawa States have equally been wonderful in their support to our operations. The Governor of Borno State in particular, has continued to give additional support to aid our operations. We remain absolutely loyal and committed to the mandate of Operation LAFIYA DOLE.
Major General Leo Irabor
Theatre Commander
Operation LAFIYA DOLE