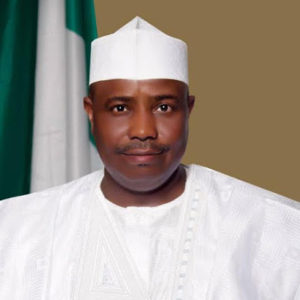 The Supreme Court has dismissed the bid by Governor Aminu Waziri Tambuwal to stop a court’s action challenging the propriety of his nomination for the 2015 governorship election by the All Progressive Congress (APC).
The Apex Court held that the nomination of Tambuwal by his party should be challenged by another governorship aspirant, Senator Umaru Dahiru on the ground that he has sufficient justifiable cause.
In a unanimous decision of a five man panel of the Supreme Court Justices, the Apex Court held that to agree with Tambuwal that the primary election that produced him cannot be challenged by another governorship aspirant is to allow democracy to be murdered by the governor.

In the lead judgment by Justice Musa Dattijo Mohammed and read by Justice Chima Nweze, the apex court set aside the decision of the court of appeal that the legal action instituted by Senator Dahiru against Tambuwal had been overtaken by events on the strength of the April 11, 2015 election of the governor

The Supreme Court said that the Appeal Court erred in law by holding that the event had overtaken the case of the appellant simply because the governorship election had been conducted after the primary election of APC that produced Tambuwal and which was been challenged in court.

The Apex Court therefore ordered that a Federal High Court in Abuja should retry the case on its merit and make decision as demanded by law.

Senator Dahiru had challenged the conduct of the primary election that produced Tambuwal as candidate of APC on the ground it was fraught with fraud.

By this development, the Federal High Court in Abuja is now to determine the matter against Tambuwal on its merit and acceleratedly as ordered by the Supreme Court.

Two appellants Senator Umaru Dahiru and Barrister Aliyu Abubakar Sanyinna who were governorship aspirants on the APC Platform in the 2015 general election had filed the appeal.

In their brief of arguments filed by Professor Awa Kalu SAN, the two appellants pleaded with the apex court to reverse the decision of the Court of Appeal which held that their suit had become academic exercise by virtue of the election of Tambuwal in the April 11, 2015 governorship poll.

In the brief of argument adopted by Mr. Ikoro M. Ikoro, the two appellants insisted that the lower court (Appeal Court) erred in law by holding that their joint suit has no life to sustain it simply because of the conducted general election.

They argued that the April 11, 2015 general election cannot take life out of their case or render it academic exercise because the suit had been filed on January 27, 2015 long before the general election was conducted.

The appellants chronicled the genesis of their suit, claiming that several frivolous motions and applications filed by the respondents at the federal high court in Abuja delayed judgment delivery until after the general election.

Their counsel argued that since all the delay tactics were at the instance of the respondents, the respondents should not be allowed to be beneficiaries of the unjust delays which made expeditious hearing practically impossible.

They asked the apex court to invoke Section 22 of the Supreme Court Act to resolve the issue to a finality as the said section of the law empowers it to act as a court of first instance in the circumstances of the case.

Respondents in the appeal are the APC, the Independent National Electoral Commission (INEC) and Hon Aminu Waziri Tambuwal.

But counsel to Tambuwal Mr. Sunday Ibrahim Ameh SAN stood his ground that the reliefs sought by the appellants at the Federal High Court have been overtaken by the general election and the declaration of Tambuwal as winner of the April 11, 2015 election.

The counsel urged the court to dismiss the appeal on the ground that it had become pure academic issue without any live.

In his own argument, Mr. Jibrin Okutepa SAN, who stood for APC aligned himself with the third respondent’s submission.

The appellants had at the federal high court sued Tambuwal and asked the court to declare that the primary poll of December 4, 2014 which produced him was unlawful, unconstitutional, null and void and inconsistent with the Electoral Act, 2010 and the APC guidelines.

They claimed that the list of accredited delegates was swapped at the election venue and that votes were arbitrarily, unlawfully and fraudulently allocated to the aspirants after series of manipulation, intimidation and threat from the then state government officials backing the third respondent.

They asked for the court order restraining INEC from acting, publishing or recognizing Tambuwal as APC gubernatorial candidate.

They also prayed for an order nullifying or withdrawing the nomination of Tambuwal and that a fresh primary election be ordered.

But the appeal court in its judgment delivered by justice Moore Adumein set aside the decision of the trial court and held that the reliefs of the plaintiffs cannot be granted again in view of the 2015 governorship poll already won by Tambuwal.