Home Security US to Share Intelligence with Nigeria – Africom Commander 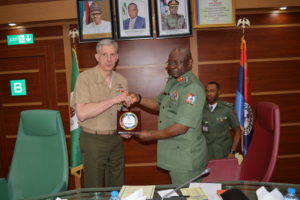 Nigeria has been described as an important nation that is very strategic, not only to Africa but to the whole world while her success determines Africa’s success in the social political and economic emancipation of the continent of Africa. The Commander of the United States African Command (AFRICOM), General Thomas Waldhauser, said this when he paid a courtesy call on the Chief of Defence Staff, General Abayomi Gabriel Olonisakin at Defence Headquarters, Abuja.
General Waldhauser said he was happy with the level of warm cordial relationship between the United States and Nigeria.  He pointed out that the USA would do all that is needed and necessary to make Nigeria succeed in its leadership role in Africa, especially in its untiring effort at wiping terrorism from Nigeria and the West African Sub-Region.
The Commander AFRICOM stated that the United States is committed to maintaining productive and fruitful relationship with Nigeria by stepping up her assistance in the areas of training, intelligence sharing, capacity building and hardware.  He noted that fight against terrorism is a multifaceted problem that demands concerted efforts of the world body to completely eradicate in the interest of mankind.
In his remarks, the CDS, General Olonisakin expressed appreciation of the US Government for its tremendous contributions to the Armed Forces of Nigeria in the fight against insurgency and other sundry crimes across the country.   He stressed that the US has been forthcoming in manpower training, equipment support, upgrading of Special Forces, intelligence, surveillance, reconnaissance (ISR) and other relevant areas as required by the Nigerian Army, the Navy and the Air Force.  He noted with gratitude the US supports, which he admitted have provided the Armed Forces of Nigeria with some critical capabilities that have gone a long way to help in containing the spate of security challenges that threaten our nation, Lake Chad Basin and West African Sub-Region.
The AFRICOM Commander was accompanied by the US Ambassador to Nigeria, Mr Stuart Symington, US Defence Attachee to Nigeria, Colonel Patrick Doyle and some senior staff of US Embassy, while the CDS was assisted by the representatives of the Service Chiefs and Principal Staff Officers from the Defence Headquarters.
RABE ABUBAKAR
Brigadier General
Acting Director Defence Information
PRNigeria encourages institutions to be transparent in their information management as it provides news items from authoritative sources for free use by the media