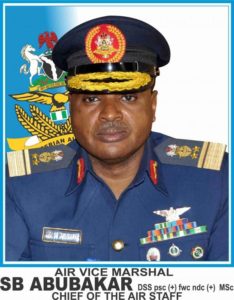 The Nigerian Air Force (NAF), in collaboration with Nigerian Universities, has successfully produced a test bench locally for testing the anti-skid system on the Alpha Jet aircraft. The new test bench allows the entire anti-skid system to be tested on the ground before installation on the aircraft unlike what hitherto obtained where test on the aircraft component was carried out in parts.

This feat has not only saved the country huge foreign exchange that otherwise would have been spent abroad, it also marks a major research and development breakthrough for the NAF in its drive towards developing local capacity for  self-reliance.

The feat is also a major plus for the NAF in its conduct of offensive air operations in the North East given the crucial role played by the Alpha Jets in the ongoing counterinsurgency operation against the Boko Haram Terrorists.

Those involved in the collaborative effort with the Air Force Research and Development Centre include Professor Mohammed Dauda from Ahmadu University Zaria as well as Engineers Kabiru Abdulwahab and Mahammad Shuwa from University of Maiduguri.

Others are Professors JD Jiya, EE Omixegba, Engineer Mohammed Baahir and Dr Kabiru Ibrahim from Abubakar Tafawa Balewa. The latter team helped the NAF with the repairs of faulty gyro and UHF/VHF radio systems, which has been a recurrent issue, on the Alpha Jet due to old age.

Meanwhile the Chief of the Air Staff, Air Marshal Sadique Abubakar has promised to give more aircraft maintenance work to the team with a view to spurring technological growth as well as save the country scarce resources.

The CAS made the disclosure in Kaduna while appreciating the combined team of professionals from the Nigerian Universities for its spirited effort and contribution to national development.

You are please requested to disseminate this information through your medium for the awareness of the general public. Thank you for your usual support and cooperation.