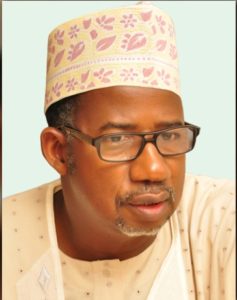 The Economic and Financial Crimes Commission, EFCC, on Wednesday, May 10, 2017, arraigned a former Minister of the Federal Capital Territory, Bala A. Mohammed before Justice A. M. Talba of the Federal Capital Territory, High Court sitting in Gudu, Abuja, on a 6-count charge bordering on abuse of office, false declaration of assets and fraud to the tune of N864million.

Bala, while in office as minister, allegedly received N550million as bribe from the Aso Savings and Loans Limited with respect to some properties in the Asokoro area of Abuja.

He is said to have corruptly abused his position as Board Chairman of Aso Savings by allocating four numbers fully detached duplexes and 11 numbers semi-detached duplexes valued at N314million through the Presidential Taskforce on Sale of Governments Houses, to himself.

The former minister is also accused of making false declaration of his assets.

Count one of the charge reads:

“That you, Bala A. Mohammed, while being the Minister of the Federal Capital Territory, Abuja, sometime in 2014 in Abuja within the Judicial Division of the High Court of the Federal Capital Territory did accept gratification of a house worth N550, 000,000 (Five Hundred and Fifty Million Naira) only situated at No. 2599 & 2600 Cadastral Zone A04 Asokoro District, Abuja from Aso Savings & Loans  Plc as reward for performing your official duties and you thereby committed an offence contrary to Section 18 (b) of the Independent Corrupt Practices and Other Related Offences Act 2000 and punishable under Section 18 (d) of the same Act.”

The defendant pleaded not guilty to the charge.

In view of his plea, Ben Ikani, counsel to EFCC, asked the court to fix a date for trial and remand the defendant in prison custody.

However, Bala’s counsel, Chris Uche, SAN, informed the court of a pending bail application dated May 5, 2017 and urged the court to grant his prayers.

Justice Talba ordered the defendant to be remanded in prison custody pending the determination of the bail application, while adjourning to May 12 for ruling on the application.