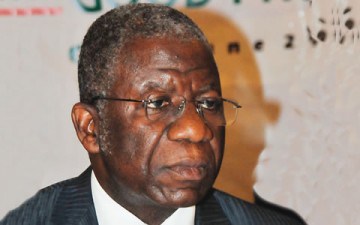 The Economic and Financial Crimes Commission, EFCC, is to appeal the ruling today by Justice Olasumbo Olajumoke Goodluck of the FCT High Court, Abuja upholding a no-case submission by a former Head of Service (HoS) and former Chairman of Presidential Committee on Financial Action Task Force, PCFATF, Stephen Oronsaye on the 7-count charge of criminal breach of trust brought against him by the Commission.

Orosanye was alleged to have taken undue advantage of his office to receive N190million, part of a N240million grant for the committee by the Central Bank of Nigeria, CBN, and converted same to personal use.

The prosecution had after calling six witnesses closed its case setting the stage for Oronsaye to enter his defence.

Rather than enter his defence, Oronsaye, through his counsel, Kanu Agabi, SAN, on December 9, 2016 filed a no-case submission urging the court to strke out the charges on the grounds that they are defective and lacks essential elements required to prosecute the defendant.

Agabi stated that the prosecution neither specified the amount that was entrusted to the defendant, nor the mandate of the committee he chaired.

The learned silk contended that there was no proven offence by the prosecution to warrant the defendant to enter defence.

In his counter argument, the prosecuting counsel, Offem Uket, told the court that the prosecution had proved its case.

According to him, the prosecution had established a prima facie case against the defendant as to warrant his defence.

Uket believed that it was not right to bring up the issue of imperfection of charges at this stage, as it was against the provisions of Sections 220 and 221 of Administration of Criminal Justice Act, (ACJA), 2015.

He, therefore, urged the court to refuse the no-case submission by the defence.

Ruling on the application today, Justice Goodluck held that, “the prosecution has not put anything before the court to justify the charges for which the defendant is being tried”. He consequently, discharged the accused “of the 7-count charge against him”.

However, the Commission believes the trial judge erred in his ruling and will approach the appeal court to set aside the ruling.