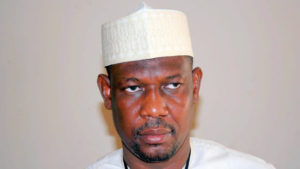 Murtala Adamu, Executive Chairman Zamfara State Universal Basic Education Board was on Friday May 12 convicted and sentenced to six months imprisonment by Justice Zainab Abubakar of the Federal High Court Gusau Zamfara State for allegedly engaging in private business while in public service.
The convict’s journey to prison started when the Commission received a petition from one Abdullahi Nakura who alleged that the convict refused to pay him and other contractors for jobs executed for the board.
Upon receipt of the petition, the commission swung into action and its investigation revealed that apart from nonpayment for contracts, the convict was also in the habit of collecting kickbacks from contractors. It was further discovered that the convict also awarded contract to his own company.
In her judgment, Justice Zainab discharged and acquitted the convict on the ten count corruption charge brought against him by the EFCC but found him guilty of the offence of engaging in private business while still in Public Service. Accordingly, the convict was sentenced to six months imprisonment or a fine of N200, 000 (Two Hundred Thousand Naira Only).
The convict was a two term House of Assembly Member in Zamfara State between 2003 to 2011 after which he was appointed chairman of the Zamfara State Universal Basic Education Board where he is now serving his second term.
One of the charge read that “You Murtala Adamu Trading under the name and style of MJIE Enterprises ( while being the Executive Chairman of the Zamfara State Universal Basic Education Board)  on or about 25th April,  2012, within the jurisdiction of Federal High Court disguised the origin of the sum of N3,000,000 (Three Million Naira Only)  paid by Alhaji Yusha’u Sokoto of Alkanci Furniture by way of receiving the said sum into an account you maintain in the name of MJIE Enterprises in Fidelity Bank which sum was derived directly from participation in corruption with the aim of concealing the illicit origin of the money and you thereby committed an offense punishable under section 15(1)(a)(ii) of the Money Laundering Prohibition Act, 2011.
Wilson Uwujaren
Head, Media & Publicity