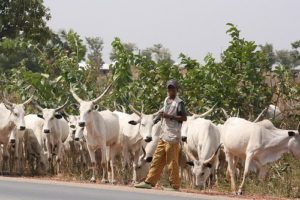 The attention of the Benue State Government has been drawn to media reports particularly that which appeared on page 41 of the Nation Newspaper of 31st May, 2017. The report is credited to the Miyetti Allah, Kautal Hore, a Fulani socio-cultural association which held a Press Conference in Abuja to reject the Open Grazing Prohibition and Establishment of Ranches Law signed by, Governor Samuel Ortom.

2. In the aforesaid report, the National Secretary of the Association Engr. Saleh Alhassan, sought to justify the reprehensible, irresponsible and criminal destruction of lives and properties in Benue State on the grounds that the Fulani herdsmen are the original inhabitants of the Benue Valley. He claimed that they are engaged in a lingering crisis with the current inhabitants in the state, particularly the Tiv, over Natural resources.

3. The President of the cattle breeders’ Association, Alhaji Abdullahi Bello, described the Anti-Open Grazing Law as “wicked, obnoxious and repressive.”
According to the report “the association vowed to mobilize herdsmen in the country to resist the law as it was a deliberate attempt to enslave their members.”

4. The Benue State Government condemns the statements of these leaders of the association and their stand which amounts to open declaration of war on Benue State citizens. The Government calls on the Security Agencies to arrest these leaders of the Association for prosecution for openly making inciting statements capable of breaching public peace and order.

5. Benue State and its people are under threat. We request the Federal Government to call Miyetti Allah and its leaders to order before they plunge the country into a conflagration which will be difficult to contain.

6. We call on all Nigerians to stand up and condemn the threat of Miyetti Allah. Our legitimate contribution to the resolution of herdsmen and farmers crises should be appreciated because the clashes between farmers and herdsmen remain one of the most protracted problems across our country. To be sure, the threat by Miyetti Allah is not only for Benue but for all states that have or will have farmers and herdsmen crisis.

7. The “Open Grazing Prohibition Establishment Law 2017” was enacted by the elected representatives of the people, the Benue State House of Assembly in exercise of her powers as provided for by section 4 of the Constitution of the Federal Republic of Nigeria 1999 (as amended). Part 2 of the Second Schedule to the Constitution reinforces the House of Assembly’s power by providing that “a House of Assembly may make Laws for that State with respect to industrial, commercial or agricultural development of the State.”

8. With regards to ownership of Benue Lands and the natural resources therein, the Preamble to the Land Use Act which is also a Constitutional provision “… Vests all Land comprised in the territory of each State (except land vested in the Federal government or its agencies) solely in the Governor of the State , who would hold such Land in trust for the people and would henceforth be responsible for allocation of land in all urban areas to individuals resident in the State and to organisations for residential, agriculture, commercial and other purposes while similar powers with respect to non urban areas are  conferred on Local Governments.

9. Section 1 of the Act, further provides that all land comprised in the territory of each State in the Federation are hereby vested in the Governor of that State and such land shall be held in trust and administered for the use and common benefit of all Nigerians in accordance with the provisions of this Act.

10. A combined reading of the above Constitutional provisions reveals in clear terms that the State Governor is responsible for allocation of land in all urban areas to individuals resident in the State and organizations for residential, agricultural, commercial and other purposes while similar powers are conferred on Local Governments with respect to non-urban areas. The Benue State Anti-grazing Law is therefore Legal and valid.

11. With regards to Miyetti Allah’s assertion that the law offends the constitutional provision on freedom of movement, we wish to state in unequivocal terms that the law does not restrict human free movement neither does it prohibit grazing of cattle but only seeks to confine the rearing and grazing of cattle to confined ranches which is in line international best practice for animal husbandry as well as legal provisions prohibiting loitering of animals. WE CHALLENGE MIYETTI ALLAH TO BRING ANY BETTER OR SUPERIOR SOLUTION THAT WOULD RESTORE LASTING PEACE BETWEEN FARMERS AND HERDSMEN TO THE TABLE RATHER THAN ISSUE THREATS THAT WILL COMPOUND THE PROBLEM.

12. Meanwhile, we invite all Nigerians to objectively study the Anti-Grazing Law to be better informed about its contents. It is clear that the leadership of the socio- cultural Association has not taken the time to go through the law, which is fair, just, non-discriminatory and applicable to everyone in the state.

13. The objectives of this law include preventing destruction of farms, ponds, settlements and property by open rearing and grazing of livestock as well as incessant clashes between nomadic livestock herders and farmers. Benue State has suffered enormous human and material loses to these incessant crises over the years.

14. A 2014 report conducted by the Benue State Bureau for Local government and Chieftaincy Affairs found out that the destruction which invading Fulani herdsmen caused across 10 local governments of Benue State exceeded N95 billion in that year alone. Thereafter, the attacks covered more council areas and were more deadly and destructive. This is the state of affairs that prompted the people of the state to seek a permanent solution to this constant challenge through their elected representatives led by the Governor of the Benue State. This is the history of the “LAW TO PROHIBIT OPEN REARING AND GRAZING OF LIVESTOCK AND PROVIDE FOR THE ESTABLISHMENT OF RANCHES AND LIVESTOCK ADMINISTRATION, REGULATION AND CONTROL AND FOR OTHER MATTERS CONNECTED THEREWITH.” The law encompasses all livestock including pigs, goats and other domestic animals.

15. Apart from the unreasonable justification of the herdsmen’s attacks on Benue people the Miyetti Allah, through their leaders, attempted to twist history to conform with their whims and caprices.
For the avoidance of doubt these leaders are invited to answer these posers:
(i)          When did the Fulani arrive in Benue State?
(ii)         Do they remember that the Fulani engaged the Tiv people when they waged Jihad against the indigenous ethnic groups in the Benue Valley?
(iii)        Why would the so called original inhabitants (owners) expect to be welcome by the visitors since Engr. Saleh asserts that what they will not accept is for people not to welcome them?
(iv)       Are herdsmen versus farmers crisis all over Nigeria, all geopolitical zones, North West, North East, North Central, South South, and South East, including Southern Kaduna, Plateau, Taraba, Enugu, Cross River, Zamfara, Ekiti, Ondo, Oyo, Adamawa, Bayelsa, Anambra, and most recently Niger and Edo States all based on the fight for natural resources and right of original inhabitants?

16. For the avoidance of doubt, the people of Benue state are the original indigenes of their ancestral land and are concerned with preventing stock breeders from violently disrupting their economic and social life through unregulated activities. Engr. Alhassan therefore completely missed the point when he insisted that livestock breeders must be welcome in the state. For the avoidance of doubt, there are many ethnic groups in Benue lawfully carrying on their businesses and profession without any form of discrimination or hostility from the Government and people of the State. What the Government cannot accommodate is any group be it persons or any Organization breaching the peace of the state.

17. Indeed, Alhassan had contradicted himself when he stated that his association was partnering with the Federal Ministry of Agriculture and Rural Development on practicing Experimental Ranching and Nomadism as part of proffering solution to the crisis. By his own admission, ranching offers the best and permanent solution to this problem.
18. There is nothing repressive nor obnoxious or wicked about a lawful avenue to safeguard lives and property of indigenes and non-indigenes living in Benue State which is the primary responsibility of the Government.

19. The Miyetti Allah however, exposed their open disregard for constituted authority by vowing to mobilize herdsmen in the country to resist the law. These comments in our estimation are treasonable as they amount to threats to disobey the law and is therefore a recipe for anarchy and threats to the peaceful existence of not just Benue State but Nigeria in general.

20. Why would an association which considers itself as partners in progress describe peaceful attempts at conflict resolution as decimation? From its own account, it appears as if the Miyetti Allah Socio-cultural Group is always hostile to peaceful efforts at resolving these unfortunate clashes with farming communities over grazing land.

21. The Government of Benue State restates its commitment to finding peaceful and legal means of resolving all conflicts within its domain and commends the Benue State House of Assembly for courageously standing on the side of law and order and for being true Representatives of our people in the speedy manner it passed the Bill into Law. There is no legal or moral basis for challenging a law that is meant to promote peace, economic development and clampdown on criminals be they armed herdsmen or cattle rustlers. Indeed section 20 (1) of the Law prescribes stiffer penalty for cattle rustling which indicates that the interests of herdsmen have been adequately protected by the Law.

22. We also commend the Government of the Federal Republic of Nigeria for directing Security Agencies to ensure that the Herdsmen/ Farmers crisis across some states of the country be brought to an end.

23. The Ortom administration appreciates the support of the good people of Benue State as demonstrated by the massive turn-out at the public hearing conducted on the Open Grazing Prohibition Bill. This law has come to stay for good. The Government appeals to the people to remain calm and also to remain vigilant.

24. Any suspicious movement, gathering of people, or suspicious activities of strangers should be promptly reported to the Government, the Police and other security agencies in the state. We appreciate the Federal Government for its support and also pray for the speedy recovery of our dear President, Muhammadu Buhari. We urge our people to sustain their support for the Ortom administration.