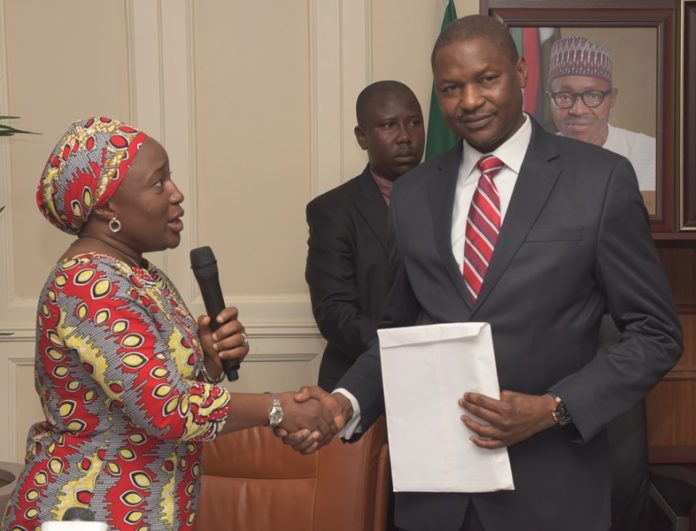 The Honourable Attorney General of the Federation and Minister of Justice, Abubakar Malami, SAN, has stressed that the Freedom of Information Act 2011 provides a legal guarantee for access to information, adding that it requires public institutions to proactively publish certain classes of information as well as to release information upon request.The AGF made this known at the Media Launch and Official Handover of the Federal Ministry of Justice Upgraded Website and FOI Portal handed over to the Ministry by the Right to Know (R2K) Nigeria on Thursday 3rd August, 2017, at the Ministry’s headquarters.Malami stated that, “In essence, the Act provides a legal guarantee for access to information and requires public institutions to proactively publish certain classes of information as well as to release information upon request.”He added that, “the Freedom of Information Act 2011 came into force on 28th of May, 2011. The Act was a milestone in our National Legislative Agenda as it subjects certain records of Public Institutions as well as some Private Institutions to a disclosure regime in line with ideals of open and transparent government.“The Act has specifically highlighted the fact that access is necessary for meaningful exercise of free expression on matters of public or political interest”, he further explained.The Minister affirmed that, Section 29 (1) of the Act establishes in the Attorney General of the Federation an oversight organ for monitoring, promoting and protecting the right to access records and information.He also revealed that, it also mandates all public institutions to submit to his office on or before February 1st of each year, a report on their compliance status.He further stated that the Federal Ministry of Justice as a focal Ministry with oversight responsibility for the implementation of the Act had taken several measures to encourage Public Institutions to implement the Act.Malami further expressed that his Office in pursuant to the realization of the intent and the spirit of the FOIA, serves as the FOI ombudsmen to resolve non-compliance complaints by impressing it on MDAs to respond to FOI requests.He reiterated that the unveiling, official handover and eventual use of the FOI web portal will go a long way towards demonstrating the current administration’s commitment to the principles of full disclosure, transparency and accountability in the conduct of government business.According to him, one of the core policies of President Muhammadu Buhari’s administration is to fight corruption and that the administration is more prepared than ever to promote openness in government as an anti-corruption tool.He also stated that three (3) Executive Orders with potential to significantly change some of the ways government business and operations are conducted was recently signed into law by the Acting President, Prof. Yemi Osinbajo.“Basically, in line with the Orders, the Ministry’s upgraded web portal will provide a platform to publish the requirements within the scope of its mandate”, he stated.He reaffirmed that, during the London Summit on Anti-Corruption held in May 2016, the President made an international commitment to fight corruption and also to join the Open Government Partnership which Nigeria became a full member of the International OGP in July 2016 as the 70th nation.“The OGP National Action Plan (OGP/NAP) seats out four thematic areas, namely Fiscal Transparency, Access to Information, Anti-Corruption and Citizen Engagement as well as fourteen commitments that Nigeria is to implement from 2017 to 2019.“The OGP/NAP was developed through a co-creation process that saw the government and non-state actors working together that advance those governance issues that matters most to Nigeria citizens’’, he explained.He mentioned that one of the thematic areas is the Access to Information with two commitments; to promote and actualise the rights of citizens to request and receive information about how they are governed and how the resources of Nigeria are utilised.“Also in fulfilment of commitment 10, Nigeria is to improve compliance of public institution with the FOI Act with respect to response to requests and proactive disclosure.“Under commitment 11, the government of Nigeria and Civil Society Organizations are also required to adopt technology based information systems and standards that will ensure that information is collected, collated and stored in a form that enables public officials to efficiently and effectively retrieve required information within the time prescribed by law in the FOI Act”, he added.The AGF therefore insisted that one of the ways to implement these commitments is through the use of technology and innovation to make public information available to the citizens, surmising that the setting of the FOI portal is a response to the need which is coming at a very auspicious time.Earlier in her remark, the Coordinator, Right to Know (R2K), Nigeria, Ene Nwankpa prevailed on relevant stakeholders to use, monitor and report on the implementation and success or otherwise of the FOI portals so far developed specifically for Bureau for Public Service Reforms (BPSR), Nigeria Extractive Industries Transparency Initiative (NEITI) and now Federal Ministry of Justice.She said they are part of efforts to strengthen access to information, transparency and accountability in public service in the country.Ene further urged the Ministry to sustain the operation of the FOI portal to proactively disclose information as well as respond to public inquires on its operations and services to citizens as part of its everyday duty.The RTK coordinator also encouraged the Ministry to utilize its oversight functions as prescribed by the FOI portals on their respective website as part of efforts to implement the Open Government Policy optimally.Also in her opening remarks, Director, Planning Research and Statistics (PRS), Beatrice Jedi-Agba represented by her Assistant Director, Odiomene Akani, said that the restructured FOI portal allows for submission of requests, viewing applications and tracking responses on requests.She pointed out that, the website and FOI portal will serve the ultimate good to the large society and depicting the transparency and accountability in the affairs of the Ministry.Ogundoro ModupeAssistant Director