Home Features State of the States and how they will vote for the #NotTooYoungToRun... 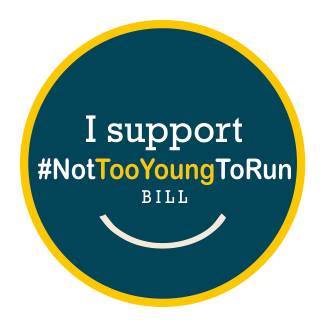 On July 26 and 27, 2017, the Nigerian Senate and House of Representatives respectively passed the constitutional amendment bills for age reduction and independent candidacy, more commonly known as the #NotTooYoungtoRun Bill. The Not Too Young to Run Bill seeks to bolster youth political participation by reducing the age requirement for elected positions across the country. If enacted into law, the Bill would reduce the minimum age for presidential candidates from 40 to 35 as well as the age for gubernatorial candidates from 35 to 30. Also, Nigerians aged 25 and above could be elected to serve in the House of Representatives and the State Houses of Assembly.

The #NotTooYoungtoRun Bill has the potential to not only engage young people, but to leverage their abilities to transform the country’s politics. It has become trite to say that a country’s young people are its future, but in Nigeria they are in fact it’s present. The majority of Nigerians (60-70 percent by some estimates) are under the age of 35. They are disproportionately hurt by some of the nation’s most serious problems (unemployment, low educational investment) and are exposed to new knowledge and tools to solve these problems. For Nigerians of all ages, the willingness of the National Assembly to draw this cohort into Nigerian politics should be met with celebration.

However, the #NotTooYoungtoRun Bill, as part of the constitutional amendment bills, needs to be approved by at least two-thirds of the State Houses of Assembly (at least 24 states), before it can be presented to the President for assent and it becomes law.

#NotTooYoungToRun, a nationwide citizen driven movement led by a coalition of civil society organizations, has mobilized young Nigerians to advocate for the bill’s passage. In each state, youth organizations have been meeting with legislators, governors and traditional leaders; staging peaceful marches for National Days of Action, and enlisting their colleagues to get involved in the campaign.

In some states the path forward is clear. Cross River, for instance, has a history of electing relatively young people to public office. Benedict Ayade, the current governor, was only 42 years old when he took office. Every governor of the state since 1999 has been under 50 years at their first election. #NotTooYoungToRun campaigners in the state have met with every political party represented in the State Assembly. These parties pledged to not only support the bill when it arrives before them, but to reduce their own internal age rules.

In Bauchi, #NotTooYoungToRun campaigners have met with overwhelming support in their message. Nasir Umar Launi, the campaign coordinator for #NotTooYoungToRun in Bauchi State, says “the Bauchi House of Assembly has been with us since day one.” During the  National Day of Action organized by the campaign on March 30, 2017, Hon. Shehu Kawuwa Damina, Speaker of the Bauchi State House of Assembly, personally called on all members to be in attendance. In Kano and Kebbi states, #NotTooYoungToRun campaigners have secured pledges of support from every member of the assembly through individual meetings.

The #NotTooYoungToRun bill faces resistance in other states such as the progressive minded Lagos state, where Olumide Kola-Lawal, campaign coordinator for Lagos, remarked that body language of the speaker and most members had been “unfavorable”. “It is clear when we meet them, they are not in support,” he said, “but it seems they don’t want to come out and say so because it is political suicide.” Many members in the Assembly are serving their third term, and may fear being unseated by new young contenders.

In Katsina state, despite having the youngest speaker of any state in the country, religious and cultural attitudes make legislators skeptical of allowing youth into leadership positions. Hon. Abubakar Yahaya Kusada, Speaker for Katsina State, has however assured that the bill will be passed in his state: “80% of the members of the Assembly fall within the age of 30 to 40. So, whenever the #NotTooYoungToRun bill comes, we will give it speedy passage so that our youths can fully benefit from it”. In Jigawa state, #NotTooYoungToRun coordinators are working with young religious leaders to persuade decision makers in and out of the legislature of the bill’s merits.

In most states, the direction of the vote remains uncertain. Martins Amaewhule, the Majority Leader for Rivers State has advocated for the bill before the state’s House of Assembly. Most of the members of the Rivers State House of Assembly are young.  In Adamawa, recent impeachments of the Deputy Speaker and Majority Leader make it hard to navigate the Assembly or predict members’ votes. It is also possible that the power bloc in the State and rivalry between the sitting Governor and the sponsor of the bill in the Senate might impact voting in the state.

The challenges before the State Houses of Assembly in ensuring the passage of the State Houses of Assembly in passing the #NotTooYoungToRun bill are rather monumental. The method of voting on constitutional amendments in the state legislatures has not yet been revealed. Should all amendments be voted on collectively, it is likely that fear of more controversial elements will cause state legislators to vote down the whole package including the Not Too Young to Run Clause. If on the other hand, each amendment bill is treated separately, the bill may scale through – though some legislators will still fear being displaced by a younger generation of candidates.

The constitutional amendment will allegedly be transmitted to the State Houses of Assembly in a few days for concurrence. #NotTooYoungtoRun campaigners, and advocates of the Bill, have only a matter of weeks to persuade those states leaning towards “no” and confirm support from states that are undecided. Even in states that are almost certainly going to vote “yes” young people need to keep up their advocacy right up until the last minute. “As far as we’re concerned there are no ‘yes’ states”, said Samson Itodo, Executive Director of YIAGA, “We don’t know how anyone will vote until they vote.”

Dafe Oputu a Research and Program officer at the Youth Initiative for Advocacy, Growth and Advancement.