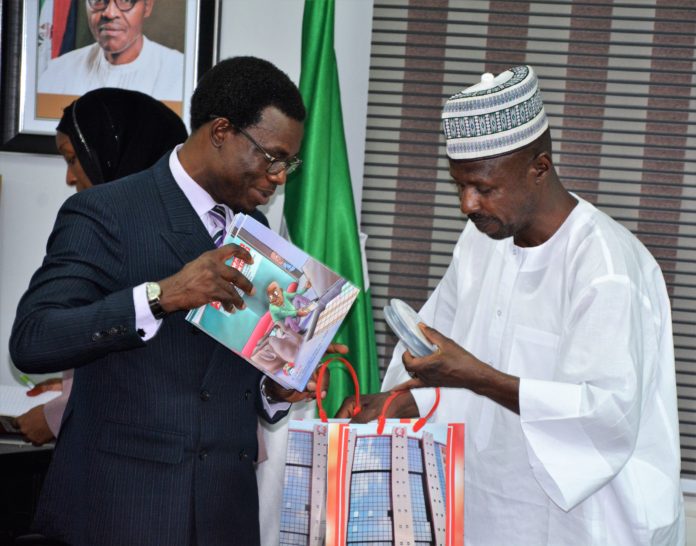 African Union Commends EFCC in Fight Against Corruption
The African Union Economic, Social and Cultural Council (AU-ECOSOCC) has commended the unrelenting efforts of the Economic and Financial Crimes Commission, EFCC, in the fight against corruption.
Nigeria’s Representative and Chairperson, Committee on Social Affairs and Health Cluster, Dr Tunji John Asaolu, who gave the commendation during a courtesy visit of a 12-man delegation to the EFCC headquarters in Abuja on Wednesday June 20, 2018, noted that the AU’s endorsement of President Muhammadu Buhari as the 2018 AU Anti-corruption Champion was in recognition of his commitment and drive towards tackling issues of corruption within Nigeria and in the diaspora.
Asaolu stated that the purpose of the visit was to strengthen the AU’s collaborations with the EFCC and for the delegates present to learn from the wealth of experiences and knowledge, with a view to replicating successful strategies in their respective home countries.
Responding, the Ag. EFCC Chairman, Ibrahim Magu, expressed his appreciation of the current President’s political will, support and non-interference in the fight against corruption, which has led to numerous successes recorded thus far.
He added that from January 2018 till date, the EFCC has secured more than 90 convictions of corrupt individuals, including several politically exposed persons, across the country. He emphasized his willingness and readiness to “fight corruption to a standstill”.
Magu further stressed that the fight against corruption should be taken seriously in all African countries, with aggressive sensitisation campaigns to reach the citizenry, in order to develop and maintain a healthy corruption-free environment that would, in time, compete with that of developed countries worldwide.
He informed the delegation that an interactive session of members of the AU-ECOSOCC with judges, investigators, prosecutors and staff of the Commission will be organised so as to share experiences, as well as measures adopted that led to significant recoveries for the country.
The delegation was given an overview of the Commission’s various sensitisation and enlightenment efforts by the Director, Public Affairs, Osita Nwajah, as well as insight into the Commission’s Cooperative and Welfare Programmes by the Director, Mrs Rose Ekawu.
The visiting delegation was made up of cluster members and other participating members in the ongoing four-day anti-corruption conference organised by the African Union Economic, Social and Cultural Council (AU -ECOSOCC), with the theme; “Winning the Fight Against Corruption; A Sustainable Path to Africa’s Transformation”. The conference commenced on Monday June 18, 2018 and is to come to an end on Friday June 22, 2018.
Other members of the AU-ECOSOCC delegation are Marienga Edward, Kenya; Padonou Sourou Fabrice, Benin; Mohamed Salih Khairy Hassan, Sudan; Chilombo Nachilima Maiden, Zambia; Oriokot Henry, Uganda; Sandu Jonathan Patrick Jasper, Sierra Leone; Abdulai Emmanuel Saffa, Sierra Leone; Pat-Davies Zuaibatu Ann-Marie; Maduike Chinwe; Oba Olasunkanmi John A and Aderinto Opeyemi. Also present at the visit were other management staff of the Commission.
In another development, Ibrahim Magu has said that the Commission will visit projects of the Niger Delta Development Commission abandoned in the region, very soon.
“We will visit such projects and ensure the completion of the projects and where money has been taken, we will go after them and recover the money. We will ensure that justice is done,” he said.
Magu made this known on Thursday, June 21, 2018, at the Abuja Zonal office of the EFCC, during a courtesy visit by the National Association of Niger-Delta Students, NANDS.
He noted that  there was a need for the anti-graft agency, to visit the region and ensure that money paid for the execution of developmental projects, but which have not been executed were recovered and the  defaulters made to face the long arm of the Law.
He said: “There’ll be a Project Monitoring Team which will partner with Civil Societies to monitor the award of contracts by the NDDC and execution of the projects.
“So, there is a need for us to partner in each of the states in the region. We will visit such projects and ensure the completion of the projects and where money has been taken, we will go after the thieves and recover the money. We will ensure that justice is done.”
Magu, who was bestowed with the award of 21st Century Icon Of Integrity And Role Model To The Younger Generation by NANDS, commended the students for the gesture and urged them to support the fight against corruption.
He said: “We have always solicited support from the youths. I am encouraged and we recognize what you are doing. We need people like you to take the anti-corruption message to the grassroots.”
National President, NANDS, Lucky Emonefe, who led the delegation described Magu as “a fearless and dogged fighter” and pledged the support of the association in mobilising the youths of the region to embrace the fight against corruption.
Wilson‎ Uwujaren
Head, Media and Publicity