Deputy Senate President, Senator Ike Ekweremadu has advocated the decentralization of the nation’s security architecture following spates of violence attacks leading to killing of innocent lives and destruction of properties across the country.

The Deputy Senate President also called on the federal government to have a rethink on restructuring this country especially the security architecture. 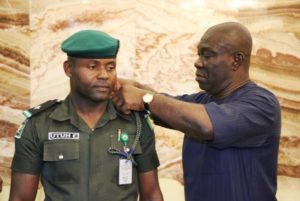 “I want to appeal to the federal government to have a rethink about the issue of restructuring most especially about our security architecture in the country”, he said.

Speaking on the recent loss of lives and property in plateau state, Ekweremadu noted that the unfortunate incident in Plateau is a situation where our leaders refuse to learn from the missteps and mistakes of the past, adding that he has clamoured for the decentralization of the security apparatus to allow the different components to manage their security system.

“The unfortunate incident in Plateau state is a situation where our leaders refuse to learn from the missteps of the past. For many years, some of us have been consistent in clamouring for the decentralization of our security architecture”, he said.

“If we have not taken that step, we will continue in these quagmires.  It looks like innocent people who have voted us into power are losing their lives because we cannot protect their lives and property”. “There is no way in a country as diverse as ours you expect a centralized security architecture to work.  The sad news is that not only that people have died but they will continue to die because we have refused to do the right thing.

“I am appealing to the federal government to allow us set aside about three months to amend the constitution of the federal Republic of Nigeria to allow the component units have their own police to checkmate this recurring decimal.  If for instance the people of Plateau are empowered to have their own Police, we will have the right to place the blame of any security lapse on the doorsteps of the Governor”.

He noted that the APC Convention on the other hand attracted a lot of security personnel to Abuja and of course the poor inhabitants of our villages were left unattended to leaving them to the mercy of marauders.

“I sympathize with the people who lost their lives and the plateau people for the unfortunate incident”.

Earlier in his speech, Ekweremadu commended the promoted officers for their dedication to duty, stressing that “promotion like this is not only for the good works you have done but also an invitation to do more and an encouragement to others and reminded them that there is benefit in hard work and dedication.

Special Adviser (Media) to Deputy President of the Senate