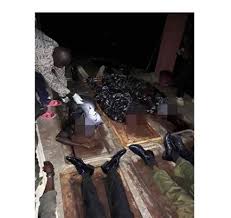 Police Investigate Killing of Abuja policemen
The Inspector General of Police, IGP Ibrahim K. Idris, NPM mni, has on the 3rd July, 2018 set-up a team of Specialized Crack Investigation Detectives, Police Scene of Crime Experts and Technical Intelligence Unit of the Force to investigate the ambush attack and killing of seven (7) Policemen while on duty on 2nd July, 2018 by Armed robbers/Bandits.
This specialized investigation Team is headed by an experienced, crime bursting and a seasoned investigator, CP Bala Ciroma. He would be assisted by the following officers
(i). Deputy Commissioner of Police in charge of the IGP Special Tactical Squad (STS)
(ii) Deputy Commissioner of Police, Department of Operations FCT Police Command
(iii) Deputy Commissioner of Police, Police Forensic Department
(iv)  Deputy Commissioner of Police, Police Central Criminal Registry
(v) Assistant Commissioner of Police, 2I/C IGP Intelligence Response Team
(vi) Assistant Commissioner of Police, Federal SARS
(vii) Chief Superintendent of Police, IGPSEC
The Team that has already commenced investigation is directed by the IGP to complete the assignment within Twenty-one (21) Days.
The mandates of the specialized investigation team are as follows:
(i) A thorough and discreet investigation of the ambush attack and killing of seven (7) Policemen while on duty on 2nd July, 2018 by armed robbers/Bandits at Galadimawa roundabout, Federal Capital Territory.
(ii) The Team is to unravel arrest and prosecute those responsible for the killings.
(iii) The Team is to detect the motives behind the ambush and killing of the seven (7) Policemen.
(iv) The Team will work with the Commissioner of Police, Federal Capital Territory in the investigation of the incident.
(v)  The Team will take over further investigation into the killings from the FCT CIID
(vi) The Team will take any other instruction from the Inspector General of Police in ensuring the prompt resolution of the crime to bring the perpetrators to justice.
(vii) The Team will obtain evidence; receive complaints and information from public spirited individuals or any other member of the public with useful information that can assist them in their investigation.
(viii) The Team is expected to proffer strategies and recommendations to forestall similar attack in the future.
The Inspector General of Police hereby implores members of the public in the Federal capital Territory to cooperate with the Investigation Team. Any member of the public with useful information about the killing will be appreciated and can use the following Numbers: 08032003913, 08061581938 and 07057337653 to reach the Investigation Team.
6.    The Force will not relent, despite this attack; in its renewed commitment in crime prevention and control and adequate protection of lives and property throughout the country, and will ensure that the perpetrators of this heinous crime are brought to justice and on time.
Ag. DCP JIMOH MOSHOOD
Force Public Relations Officers
Force Headquarters
Abuja