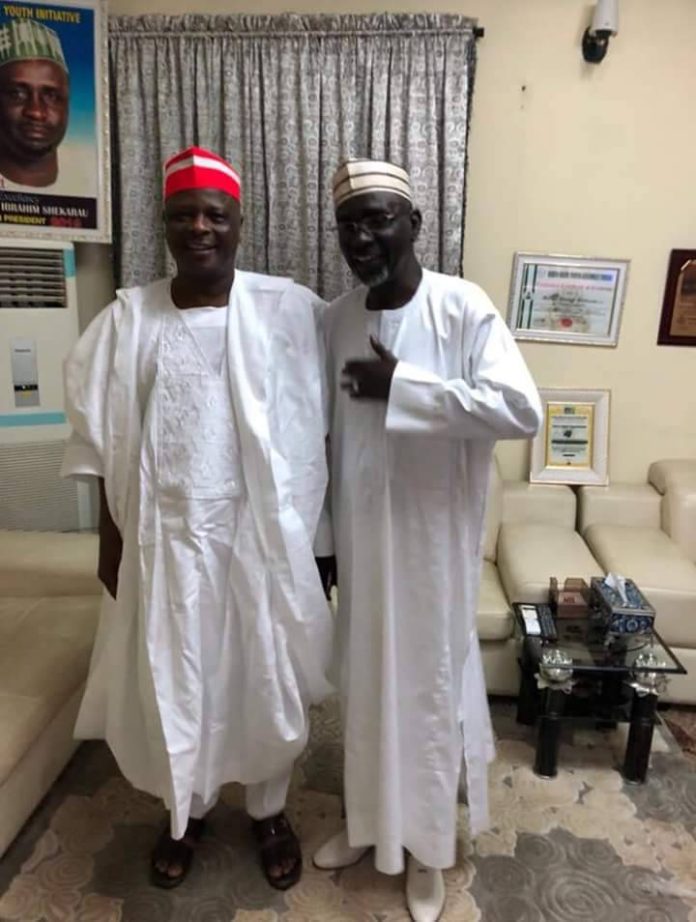 Kwankwaso was among members of the All Progressive Congress (APC) who recently decamped to the People Democratic Party (PDP), while Shekarau had decamped from APC to PDP in 2104 before the general election of 2015.

The meeting is coming at a period the Presidency and leadership of APC are intensifying efforts to woo Mallam Shekarau back to the party.

The Saturday meeting was held at Shekarau’s Asokoro residence and it was a prelude to an extended meeting with other party leaders without any official statement issued from ongoing manoeuvres.

Meanwhile, the Presidency and the leadership of APC have kickstarted an intensive lobby to woo the former two-term governor of Kano and Minister of Education, Mallam Shekarau to the ruling party as part of efforts to check and diminish the towering influence of Senator Kwankwaso ahead of the 2019 general elections.

A Presidency source who confided in PRNigeria in Abuja revealed that as part of the wooing plan, pending cases with anti-corruption agencies may be re-examined and stepped down to offer Shekarau safe landing.

The development is coming as the control of PDP’s structure in Kano State may spring up in the ongoing negotiations over who lead the party structure in the state.

In the bid to make Kwankwaso and Shekarau to work together amicable 51% of control of PDP’s structure has been conceded to Kwankwaso as a serving Senator and having the incumbent Deputy Governor, Professor Hafizu Abubakar and some legislators in the state among his strongest loyalists while 49% of the control structure was offered to Shekarau and other groups in PDP.

Shekarau and former Governor of Sokoto State, Attahiru Bafarawa were among the founding fathers of APC who decamped to PDP in 2014 after accusing some elements of APC of giving the party’s structures in their states to governors who had decamped from the PDP.

The Presidency source said: “As part of the grand plan to bring Mallam Shekarau back into the APC fold where he was founding father, top government officials in Abuja and Kano are currently pleading with him while Governor Ganduje of Kano state and some National Executive Committee members of the party have been co-opted in the bring-back-Shekarau arrangement.”

Though Shekarau had been in the Southwest in recent time, it is not confirmed yet if he met with the ‘Lion of Bourdlilon’, Asiwaju Bola Ahmed Tinubu who has been given the mandate to lead the pack in wooing other erstwhile APC chieftains back to the fold.

PRNigeria however gathered that the move may be an uphill task as Shekarau is believed to be unhappy with the treatment given to him when Kwankwaso decamped to the APC and was given the party structure in Kano, adding that Shekarau is still carrying that scar and would not let go this time around.

In a recent interview, Shekarau explained that he would like the senator representing Kano Central and others to return to PDP to remove APC from power next year.

“Since 2011 when we met at airport, we have never met each other again”, Shekarau had said.

“I did not defect to PDP from APC because of Kwankwaso. It is not true that we discussed his intention to return to PDP.

“But I will wish and pray Kwankwaso and others will return to PDP. Their return will give the party the power to dislodge APC,” he said.

At the time of this report the Presidency and the ruling party were said to have intensified their desperate efforts to bring Shekarau and other old members into the fold of APC so as to brighten its chance of retaining Kano State Governorship seat and then boost the chance of the party in the second term bid of President Muhammadu Buhari.