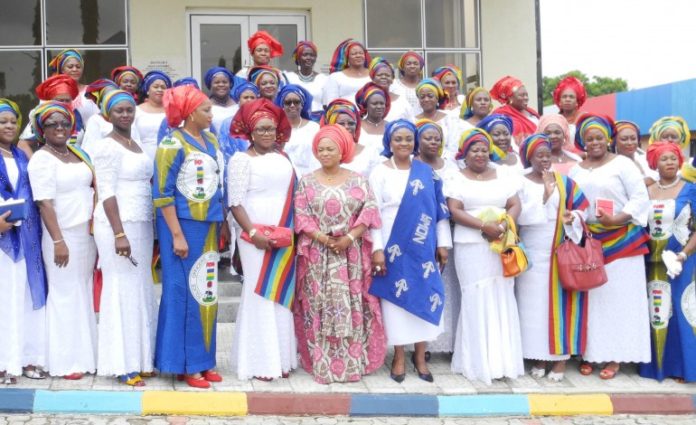 A combined population of 100 Students of DEPOWA Primary and Secondary schools have received scholarships and awards during the maiden edition of the Defence and Police Officers Wives Association’s (DEPOWA) Academic Scholarship/Awards Day held today at the Multipurpose Hall of General AG Olonisakin Building in the DEPOWA Schools Complex, Mogadishu Cantonment, Abuja.

The awards were presented in two categories, namely, the Higher Education and the Outstanding Performance categories. In the Higher Education category, 22 children of military widows benefited from a scholarship grant of 500,000 Naira each, to pursue academic studies in any higher institution of their choice, while in the Outstanding performance category, 78 Children and Wards of DEPOWA staff and military personnel were handed one academic session of free tuition and free books award for their outstanding academic and extra curricula performance at the DEPOWA Schools.

In her address at the awards presentation ceremony, the National President of DEPOWA, Mrs Omobolanle Olonisakin who presented the cheques to recipients alongside the Special Guest of honour , Chief of Defence Staff(CDS) General Abayomi Gabriel Olonisakin, reiterated the commitment of the Association to the education of youths, describing the gesture as part of the organisation’s strategic efforts to groom responsible citizens and enhance national development.

According to Mrs Olonisakin, the scholarship award was initiated
in line with the cardinal objectives of the Association to acknowledge the sacrifices of our military personnel who laid down their lives in service to their fatherland”.

Speaking further, she lauded parents who work assiduously to train their children to become responsible citizens. She maintained however, that education remains key to youths’ emancipation and national development.

The DEPOWA President also expressed appreciation to the Chief of Defence Staff General AG Olonisakin, Service Chiefs and other top military Commanders for their unflinching support to the ideals of DEPOWA, adding that in keeping with the Association’s earlier promise, the fund for the Scholarships was sourced from the proceeds of DEPOWA book Launch held recently in
Abuja.

In his remarks, the Chief of Defence Staff (CDS) and special guest of honour at the ceremony, General Olonisakin said the scholarship award has provided a great measure of relief and succour to the children and widows of fallen heroes whose despair have given way to rays of hope and sustenance.

Represented by the Director of Sports at the Defence Headquarters, Air Vice Marshall Emmanuel Wonah, the CDS appreciated the DEPOWA National President Mrs Olonisakin and her team for their passion for youth empowerment and service to humanity, describing the gesture as “the greatest of all investments. ”

General Olonisakin charged the recipients of the scholarship awards, particularly the awardees of the higher education category to see it as a ray of hope which places on their shoulders the burden of responsibility to be exemplary and role models in their moral conduct and academic pursuit. This way, the CDS noted, DEPOWA investment in them would have been a worthy initiative.

Further more,the Defence Chief said it was interesting to note that DEPOWA under the leadership of Mrs Omobolanle Olonisakin has continued to rekindle hope of the needy as well as “keeping the vision, mission and commitment of the founding mothers of the Association alive”.

Speaking individually on behalf of Parents and School Staff, Major AN Yusuf of the Army Headquarters and Mrs Justina Akawo of the DEPOWA School, thanked the National President of DEPOWA for her midas touch, which they observed had transformed the school infrastructurally and provided a conducive atmosphere for teaching and learning.

Also in his acceptance speech on behalf of other recipients, Master Apollos Ogherekaro Victor who recieved the cheque of 500,000 naira for higher education category, expressed happiness for the award and thanked the DEPOWA president for her kind gesture towards uplifting the needy in the society. He also promised that they would work hard to justify the confidence reposed in them by DEPOWA.

The event was witnessed by a large turn out of parents and students.