The Chief of Army Staff (COAS), Lieutenant General Tukur Yusufu Buratai has concluded a tour of areas affected by the activities of armed bandits in Nigeria’s northwest region.

Recall that it has been earlier reported that a visit by the Chief of Army Staff (COAS) to felicitate with troops on Tuesday during the commemoration of the 2019 Eid-El-Fitr celebration marking the end of the holy month of Ramadan.

General Buratai’s visit to the Northwest reached a climax on Thursday as he continued operational tour of the troubled areas in Zamfara and Katsina States respectively.

Represented by the Chief of Training and Operations Army, Major General Lamidi Adeosun, the COAS combed the affected areas by touring the borders and likely bandits approaches between Nigeria and Niger Republic.

The convoy of the COAS came to a halt along the Gusau — Jibia — Zurmi road, a border location close to Maradi in Niger Republic where he interacted with a detachment of Nigerien troops patrolling the borders of Niger and Nigeria.

The detachment upon interaction led by one Capt Mamadu Yousuf disclosed it is a joint patrol security arrangement between Nigeria and Niger laimed at fighting armed banditry at the borders of the two nations.

The COAS and his entourage later moved into the hinterland where they had a brief stopover and interaction with troops and local vigilantes at Yar’Gamji village in Katsina State. Recall that about 14 locals were reportedly recently killed during an encounter with armed bandits in Yar’Gamji village. Three other women were also abducted which necessitated the Nigerian Army to deploy some soldiers to the community.

While in Yar’Gamji General Adeosun read the goodwill message of the COAS to the troops and urged them to sustain the tempo against the bandits.

The General Officer Commanding (GOC), 8 Division Nigerian Army, Major General Hakeem Otiki promised an enhanced welfare package for the troops as contained in the COAS goodwill message, while urging them to crush any criminal element in the area.

“Ensure you do your job diligently without delay because as soldiers you have the license to kill criminals but you must not be killed”.

“It is your responsibility to safeguard this nation from every form of security threat. Make sure you patrol the flashpoints both day and night. Do not hobnob with any local to avoid distractions” he instructed.

The COAS and his team proceeded to the Palace of the District Head of Batsari where issues bothering on security challenges around the jurisdiction of the traditional ruler were discussed. The Chairman of Batsari Local Government Area Alhaji Mannir Mu’azu was also in the palace to receive the COAS during the visit. 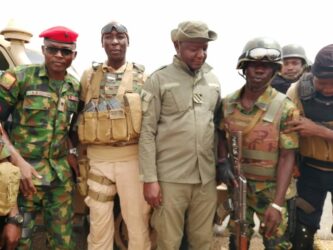 Representative of the COAS later moved to the front line, to address troops of 17 Brigade at the outskirts of Batsari town in Batsari Local Government Area of Katsina State during a Sallah Day Luncheon organized by the Chief of Army Staff in honour of the troops.

General Buratai represented by Gen Adeosun advised the troops to be professional and responsive in the discharge of their constitutional roles.

“According to him, “As professionals, you are constitutionally tasked to protect the Nigeria and her citizens. You must use your weapons legally to ensure that criminals operating in this region are decimated immediately” .

The GOC 8 Division, Maj General Otiki in his remarks applauded the commitment of the troops while tasking them to do more because “much has been given to you so much is expected accordingly”.

Representative of the COAS and his entourage later paid an operational visit to Tashan Modibbo – a local border community in Batsari axis, where a route often used by the bandits is located.

The representative of the COAS and his entourage proceeded to Katsina State Government House where the team was received by the Governor, Rt Hon Aminu Bello Masari, the Secretary of the State Government and other top government officials.

Gen Adeosun posited that the purpose of the visit is to interact with the troops as well as to assess the security situation in the State and the Northwest region.

“This visit is in line with the tradition of the COAS to pay homage to the Executive Governor of the State and assess the disposition of troops, and the security situation in the region”.

He noted that security situation in Katsina State recently escalated through the inimical activities of armed bandits but was curtailed by the gallant troops.

He also informed the Governor that peace has returned to the once troubled areas especially in Batsari Local Government. He acknowledged the efforts and support of the State government, urging them not to be tired.

Reacting to the gesture, Gov Masari prayed that the visit will be historic in curbing the menace of armed banditry in the State.

According to the Governor “We cannot sit down and watch our people being killed. We are going to do our best by providing every necessary support to the Nigerian Army in fighting these devilish elements. “We believe the military will crush the bandits same way they defeated Boko Haram Terrorists in the Northeast and so we will not relent in supporting you to do your job”.

The Governor further stated that the problems in the Northwest have no ethnic or religious colouration.

He emphasised on the capacity of the Nigerian military to the point that regional armed forces are looking up to the military because of their immeasurable roles and importance within the African continent.

Top senior Army officers from the Nigerian Army Headquarters, 17 Brigade and 8 Division participated in the operational visit to the troops in the frontline.