Kehinde was arrested alongside 14 other suspected passport racketeers on Thursday, July 18, 2019 at the Immigration Service Passport office, Alagbon, Ikoyi, Lagos, following intelligence reports received by the Commission leading to series of surveillance about their alleged criminal activities.

The suspects allegedly conspired to extort money from unsuspecting members of the public applying for international passports.

Items recovered from the suspects at the point of arrest include: Five laptops, mobile phones and several official documents.

They will be charged to court as soon as investigations are concluded. 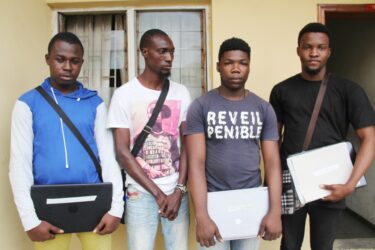 Idris and his company were arraigned on April 15, 2019 on a two-count charge, bordering on conspiracy and diversion of funds to the tune of N30million.

Idris’ journey to prison started when the EFCC received a petition against him and his company alleging a criminal diversion of funds to the tune of N30, 000,000.00 (Thirty Million Naira).

Count one of the charges reads: “That you, Usman Ibrahim Idris, being a Managing Director and alter ego of Influential Investment Company Limited, a company registered in Nigeria, sometime between 6th May and 6th October, 2015 at Maiduguri, Borno State within the jurisdiction of this honourable court, did dishonestly misappropriate the sum of N15,000,000.00 (Fifteen Million Naira) being investment of Abubakar Mallam Baba in Investment Company Limited for telecommunication business, and thereby committed an offence contrary to Section 308 of the Penal Code Act Ca. 102 Laws of the Borno State of Nigeria and punishable under section 309 of the same Law.”

Idris and the company pleaded not guilty to the charges, which prompted their trial.

In the course of the trial, prosecution counsel, Benjamin Manji presented three witnesses and tendered three exhibits, which forced Idris and his company to enter into a plea bargain agreement with the EFCC prompting him to change to a guilty plea.

At the resumed hearing today, the prosecution substituted the initial two-count charge with an amended three-count charge, dated and filed on July 17, 2019 to which Idris and Influential Investment Company Limited pleaded guilty to all.

In the light of their guilty plea, Manji urged the court to convict them as charged.

Justice Umar likewise, convicted both defendants as charged and adjourned the matter to July 19, 2019 for sentencing.

The convict was remanded in prison custody, pending sentencing.