Home Event Campus Journalism: All for a corruption-free media

Campus Journalism: All for a corruption-free media
By Abdulsalam Mahmud

The Nigerian media, like other strata of the nation’s socio-economic life, has been ravaged by the corruption malady. Corruption has succeeded in smearing the image of the pen-pushing profession. It has incurably shattered the reputation of many reporters and editors. In fact, many analysts are of the opinion that the country’s media is now a shadow of its once-upon-a-time glorious past.

But amidst the appalling state of affairs, speakers at the maiden edition of Campus Journalism Dialogue (CJD), held at the Bayero University Kano (BUK), still believe it is not yet doom for the Nigerian press and members of the Fourth Estate.

They however, pointed out that the crusade on eradicating corruption should be ‘flagged-off’ from school campuses. They also opined that campus journalists should help drive the advocacy campaign on ‘killing’ corruption.

The one-day dialogue, which was held at the Centre for Gender Studies, was sponsored by Civil Society Legislative Advocacy Centre (CISLAC), and themed: “Building the Future of Nigerian Media: The Corruption Challenge.” 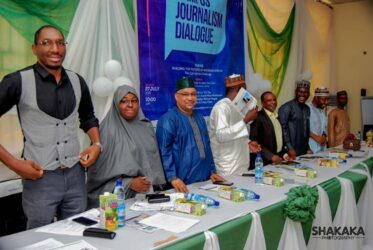 Chairman of the occasion, Mr. Auwal Musa Rafsanjani, Executive Director of CISLAC, in his welcome address, expressed cynicism on the sincerity of the Federal Government (FG’s) anti-corruption war, describing it as selective and vindictive.

“Mr. President cannot be said to be serious with his fight against corruption when corrupt public office holders in his party are walking free. It is everything, but not a war against graft when fraudulent politicians who looted public funds are rewarded with appointments either as Ministers, Ambassadors and Chairman of MDAs’ governing council. This is not the best way to go about eliminating corruption,” he said.

Rafsanjani, Head of Transparency International in Nigeria, underscored the importance of building strong institutions that will help nurture the country’s nascent democracy, rather than strong individuals or personalities who will eventually bastardized the nation’s socio-democratic culture. 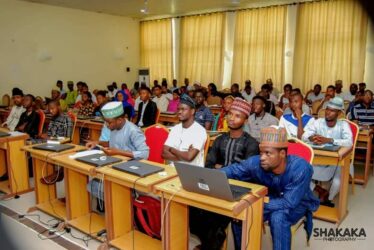 He called on the media, Civil Society Organizations (CSOs) and youths to rise against corruption and impunity in the country, stressing that student-writers should be bold in reporting all illicit and fraudulent activities on their campuses.

“I call on you to rise against any sentiment, fight and condemn acts capable of institutionalizing corruption at your schools and in the larger society. Be the vanguards of renaissance who will champion the entrenchment of positive ideals and virtuous morals. As campus journalists, this is the most fundamental obligation you owe the nation and posterity,” he said.

Mallam Yunusa Zakari, the Executive Director of Centre for Information Technology and Development (CITAD), who maintained that corruption is not about morality, but power; said politicians wielding ‘enormous’ power are the ones who loot the country’s treasury.

He noted that only the collective will of the masses will help curb corruption in government circles, stating that political will is not a terminology to be found in the vocabulary of most politicians.

Mall. Zakari, while speaking on “Effective use of Information Technology in the fight against corruption”, highlighted the effectiveness of governance, efficiency of government, transparency and accountability, as the variables used to assess the level of corruption in democratic nations.

The CITAD boss, said the adoption of Information Technology (IT) will help provide tools for governments to be effective and reach out to the general public, and other marginalized groups, through E-service, and E-Governance channels, among other technological innovations for service-delivery.

“Through E-services, we can eliminate corrupt practices perpetrated by public officials. Direct access to government’s services through electronic means forecloses the chance of intermediaries demanding for kickbacks before rendering any service. There is also a need for MDAs to have functional websites where the public can access relevant information. With ICT, we will be able to launch protest-campaigns against regressive policies. It is ICT that we also need to hold our leaders accountable, and remind them about their electoral promises.

He continued: “Oppressive regimes across the world have evolved draconian policies and measures to censor the use of social media and other ICT channels by their masses. These autocratic leaders have even gone ahead to impose tax and sanctions on the use of Twitter, Facebook and other social media platforms, in a bid to check public furore emanating from their tyrannical leadership.”

A writer and Fiction Editor, Nana Hauwa Sule, advised the participants to avoid casting misleading headlines and writing fake reports, while delivering a paper themed “Story telling: How to effectively tell your story.”

She emphasized the need for them, as aspiring journalists, to ensure that their stories are a reflection of truth, factuality and objectivity, saying they should first authenticate any piece of information they receive before writing stories.

Hauwa Sule, added: “As young journalists and writers, think globally, and not locally. It is also necessary you have a unique writing style. Don’t forget, the intro or lead of your reports, stories and articles should be punchy and concise. Yet they should be attention-grabbing.”

Another speaker at the event, Mr. Muhuyi Magagi, who spoke on “Fighting corruption on campus”, opined that the masses are a replica of the corrupt leaders they always vote into power.

Magaji, Head of Kano State’s Anti-Corruption Agency, said although the education sector is bedeviled with endemic corruption, what he called ‘extortion and sextortion’ are the two major types of corruption on campuses. He described ‘sextortion’ as sex for grade, while ‘extortion’ as money for grade.

He pointed out that fearless, unbiased, and patriotic media practitioners are needed for the war against corruption to achieve its desired goals, saying “in their bid to fight corruption and install accountability in conducting public business in Nigeria, the media must ensure corruption is thoroughly investigated and exposed.

“Investigative and articulate journalism is critical in achieving better reporting and handling of corruption cases. The media should uphold professional standards of accuracy, objectivity and responsibility. Adequate sensitization and mobilization of the citizenry by the media are necessary to ensure high depth of the attitudinal and perceptual change needed especially in Nigeria where corruption has become endemic.

“The people, as whistle blowers, should also make information on corrupt practices available to the media. Media practitioners should also embark on self-regulation, shun bribes or “brown envelopes,” and stop engaging with corrupt people. The media should be the vanguard for demanding accountability and transparency in governance,” Magaji said.

As for Jaafar Jaafar, Publisher of Daily Nigerian, it is a utopian dream hoping that the country will be rid of corruption someday. He said there are many systemic issues preventing critical institutions from functioning effectively.

“It is so unfortunate that corruption cases disappear in the news media within a short period without their resolution to the anti-corruption war. Tenable pieces of evidence to support corruption cases are rarely unearthed by the Nigerian media to assist the judiciary. Our media platforms are perceived by social commentators and scholars as lame ducks whose knees are too weak to sustain a long battle in the fight against corruption.

“Also, media performance in the war against corruption is hindered by sensationalism, flippancy, proprietorial influence, regional chauvinism, and the emergence of junk journalism. Thus, attempts to enforce the ethics of the profession in the fight against corruption have been somewhat shallow and superficial,” Jaafar said.

The dialogue organizer, Mr. Gidado Shuaib, said CJD is not just a platform to identify teething challenges affecting campus journalists and crop of talented student-writers, but an avenue to brainstorm with a view to proffering lasting solutions to highlighted issues.

The Youths Digest’s Editor, thanked CISLAC for sponsoring the event, urging the participants to always abide by the ethics of news reportage. While calling on them to eschew negative vices, Shuaib urged them to shun fake news and hate speeches so as to avoid inciting violent protests on campus.

In a chat with PRNigeria’s reporter, Miss Halima Ogido, a 400-level Law student and one of the participant, described the event as ‘spectacular, memorable and highly-educative’.

“As a young poetess who is very passionate about becoming a prolific author, I learnt some interesting tips on writing. The erudite resource persons who spoke, indeed broadened our horizons on news reporting, opinion piece writing, together with other literary writings,” she said.

Mahmud, a staff writer with PRNigeria, attended the event in Kano. He can be reached at: [email protected]