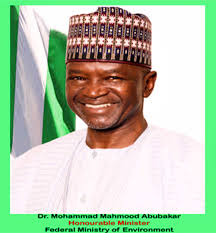 The federal government has expressed its full commitment to a comprehensive remediation of the polluted areas of Ogoniland and the restoration of livelihood to the affected communities, in line with the United Nations Environmental Assessment Report on Ogoniland.

Minister of Environment, Dr. Mohammad Manhood Abubakar reiterated this at the weekend while on a tour of Hydrocarbon Pollution Remediation Project (HYPREP) facilities and some remediation sites across Ogoniland, Rivers State.

Dr Mahmood Abubakar, who said he was in the State to assess the progress being made on various remediation sites across the land, assured the people of Ogoniland that President Muhammadu Buhari is very passionate and committed to the full implementation of the United Nations report on Ogoniland

During a visit to the Chairman of Ogoniland Council of Chiefs, His Royal Majesty King G. N. K. Gininwa in his palace where he informed the King that the Ogoni clean-up is a vital project of President Buhari’s administration which is why the President constantly makes reference to the Ogoni clean-up project.

He said, “The Ogoni clean-up is a signature project, the first of its kind in Africa and the world with no existing template but rather HYPREP was developing one that would be used hereafter for the remediation of the rest of the Niger Delta”.

The Minister assured the people of Ogoni that the Federal Government was not just concerned about remediating the environment but is also concerned about the well-being and economic life of the people.  He said “The Federal Government is aware that there are several other challenges you are facing as a result of the pollution.  That is why even though the core mandate of HYPREP is to remediate the land; other programs have been built into the Project to address some of these challenges.”

Speaking while receiving the Minister in his Palace at Korokoro kingdom in Tai Local Government Area, the Chairman of Ogoniland traditional rulers, King G. N. K. Gininwa appealed to the Minister for the inclusion of the Ogonis and to ensure that the people benefit fully from the clean-up project.

The royal father said the people of Ogoni are prepared to support the federal government towards a full and successful implementation of the UNEP report in Ogoniland.

Responding, the Minister stated that, “ I am glad to know that there is a strong synergy between the Ogoni leadership, the people and HYPREP.  I thank you especially for the high-level of support and cooperation given to the Project.  Today, I am here not just to see the sites but to also meet with you the great people of Ogoniland”.

The Minster also attended the sensitization of women on the Livelihood program in Tai, where he expressed satisfaction with the huge turnout of women for the program adding that it goes to show the seriousness of the women to key into the training programs to create economic activities for their financial empowerment.

Addressing the crowd at the event, Dr. Abubakar urged the women, men and youths to key into the various opportunities provided through the clean-up project to empower themselves to contribute to the economic growth of the kingdom.

Dr. Abubakar urged the people of Ogoni to be patient and ensure sustained peace during and after the project.  While expressing appreciation to the Royal Father, the Council of Chiefs the Youths of Ogoni, the Women, Opinion Leaders and others for their contributions to the success of the project, he appealed to the youths to desist from carrying out illegal bunkering and other activities that may negatively affect the environment.

Speaking with journalists during the inspection of some remediation sites, the Minister said with what he has seen, he has confirmed that remediation is going on across the various sites.  He said “I can say this is a big success for this administration, the people of Ogoni that I have talked to , the youths, women and elders, they are happy with this and happy with Mr. President for keeping his promise to clean up Ogoni.

“Let me say that this is something that is serious right from the start where we even have UNEP to do the assessment and follow through to ensure compliance with the recommendations.  This shows the commitment of the government, the commitment of the President and I believe every Nigerian not just the people of Ogoniland should give this project a chance.  From what I have seen, the HYPREP team is doing a good job.”

He assured the people saying “we are following all the recommendations of UNEP and we all know when you are dealing with UN, you must follow everything to the standard. The government has promised to use the UNEP Report to make sure the work is done according to the recommendations.  We are here to support the President’s commitment to the clean-up project, and I urge all of you to throw your weight behind HYPREP so that the dream of the President for a clean and healthy Ogoniland will be realized.”

Briefing the Minister, the Project Coordinator of HYPREP, Dr.Marvin Barinem Dekil went through the various activities that HYPREP has carried out since inception.  He disclosed that a total of 21 sites have been handed over to 21 contractors who were currently at different levels of remediation works while a joint team of HYPREP and UN are in the field to carry out reconnaissance in preparation for the commencement of the remediation of the complex sites.

Dekil added that the project has provided opportunities for training of Ogoni youths through the Livelihood Program, technical training for Scientific Officers who are all Ogonis in Nigeria and in Switzerland while arrangements for the training of 400 Ogoni women by United Nations Institute for Training and Research (UNITAR) has been concluded.

The Project Coordinator further informed the Minister that HYPREP had carried out two medical outreaches where 20,000 patients were treated, and 400 surgeries carried out.  He added that HYPREP was collaborating with Rivers State Ministries of Water Resources and Health for the provision of water and assessment of health facilities in the impacted communities in Ogoniland. (END)