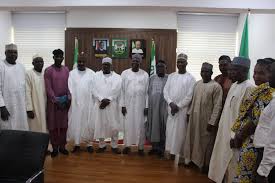 The Sensitization campaign which was led by the Acting Director General of the NBC, Surv. Adamu Adaji took the train to Adamawa and Taraba States.

In his opening remarks at the Adamawa Government State House, the Acting Director-General  stated that the Commission has been making concerted  efforts through its various sensitization campaign to ensure enduring peace in border communities.

“In the light of the previous cooperation and successes recorded with the State Government in similar exercises, the team was in the State once again to seek further support in the enlightenment of the people in the border communities about the forthcoming pilar emplacement exercise, LOT5.

Surv.Adaji also called on the Adamawa State government to assist the Boundary Commission in the provision of Base and Forward Camp Sites to support security and logistics for those that would be engaged in the emplacement exercise.

He also used the occasion to canvass for the active participation of the relevant State Boundary Committee officials for proper coordination and record purposes.

Governor Ahmad Fintiri pledged the government’s support, stressing that the exercise was in the interest of the people in particular and country at large.

The entourage also visited the Local Government Chairmen of Ganye and Toungo Local Government Areas to also solicit for their cooperation and awareness creation of their communities ahead of the exercise.

The Team equally visited the Chiefdom of Ganye who promised to inform his subjects to assist the NBC team during the monumentation exercise.

Similarly, the National Boundary Commission Team took the sensitization campaign to the Office of the Deputy Governor of Taraba State, Honourable Haruna Manu, the Chairman of Gashaka Local Government Area in Serti town, the Emir of Gashaka and to the Conservator of the Gashaka Gumti  National Park who all pledged their cooperation and readiness to assist the field team to ensure the success of the emplacement exercise in order to promote healthy relationship with our international communities.

The emplacement exercise otherwise known as the ‘Lot 5 stage’ is scheduled to take place at the Gotel Mountain and it will involve the emplacement of 322 pillars.