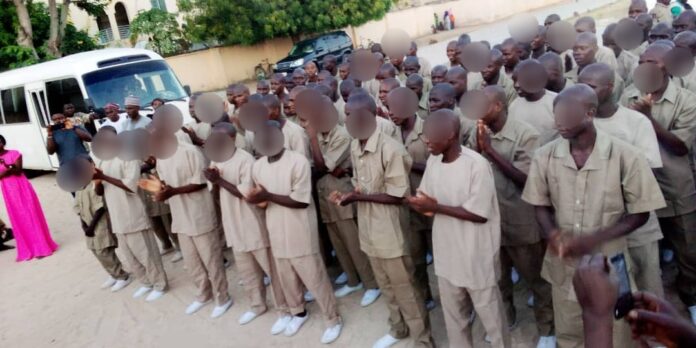 Socio-Economic Rights and Accountability Project (SERAP) has sent an open letter to the Senate President Dr Ahmad Lawan, urging him to use his leadership position to “ensure that the bill that would allow ‘repentant Boko Haram terrorists’ opportunities to access public funds to enjoy foreign education is immediately dropped, and to sponsor bills that would ensure access to justice and reparation for the victims of Boko Haram terrorist group.”

According to SERAP, “the bill, which has passed the first reading at the Senate would give opportunities to ‘repentant terrorists’ to receive foreign education including by accessing funds from the Universal Basic Education Commission, the Tertiary Education Trust Fund and subventions from the government.”

In the letter dated 28 February 2020 and signed by SERAP deputy director Kolawole Oluwadare, the organization said: “This bill erodes justice and makes a mockery of the suffering of victims, and the unspeakable human tragedy, humanitarian crisis and appalling atrocities committed by the Boko Haram terrorist group.”

SERAP said: “By calling Boko Haram members ‘ex-agitators’, the bill mocks the victims of appalling atrocities committed by the terrorist group, and is a blatant affront to victims’ dignity. ‘Repentant Boko Haram terrorists’ are not ‘ex-agitators’; they are terrorists under Nigerian and international laws.”

According to SERAP: “Boko Haram members should not be allowed to enjoy foreign education while over 13 million Nigerian children of school age are roaming our streets. Alleged perpetrators of gross violations should not get the benefits at the expense of these and other deserving children. Rather than allowing perpetrators to access public funds to enjoy foreign education, the Senate should be promoting reparation for victims, to prevent future criminality and ensure the best interest of justice.”

SERAP also said: “Should the Senate go ahead to pass the bill, and should the bill be supported by the House of Representatives and assented to by President Muhammadu Buhari, the Registered Trustees of SERAP shall take all appropriate legal actions nationally and internationally to challenge the legality of any such law and ensure that it is never implemented.”

The letter read, in part: “Prioritising the education of Boko Haram members over the rights of Nigerian children to quality education is discriminatory, as it violates Nigerian constitutional provisions, international and regional human rights obligations, and will undermine national development.”

“This bill serves neither justice nor the public interest. The bill also does not represent value for money for Nigerian taxpayers, especially coming from an institution whose individual member reportedly takes home about N182 million yearly, translating to N15.1 million monthly or N45.3 million quarterly.”

“Without justice, the seeds of future criminality and militant terrorism will grow. This bill, if passed, would only lead to more terrorism and suffering.”

“The Senate should focus on passing bills that would ensure access of victims to effective remedies including adequate reparation, and effective prosecution of ‘repentant Boko Haram members’ rather than rewarding them with opportunities to study abroad.”

“Prioritising alleged perpetrators’ rights at the expense of the victims’ rights, interests and needs is discriminatory, illegal and unconstitutional, as it amounts to ‘re-victimisation’. While the alleged ‘repentant Boko Haram terrorists have the right to an impartial and fair trial, they have absolutely no right to enjoy foreign education.”

“Pursuing accountability of perpetrators would also show that Nigerian authorities will take action against those who commit gross human rights violations against their own people.”

“In proposing bills to respond to the atrocities committed by the Boko Haram terrorist group, the Senate should ensure strict adherence to the 1999 Nigerian Constitution (as amended) and Nigeria’s international human rights obligations and commitments, including the 1985 United Nations Declaration of the Basic Principles of Justice for Victims of Crime and Abuse of Power, which provides for the basic standards for victims treatment.”

“According to our information, the proposed bill aims to establish a “National Agency for the Education, Rehabilitation, De-radicalisation and Integration of Repentant Insurgents in Nigeria.” The agency will get its funding from the Universal Basic Education Commission, the Tertiary Education Trust Fund and annual subventions from the government.”

“Section 5(m) of the bill gives ‘repentant terrorists’ the opportunity of receiving foreign education, by among others accessing the services of offshore and Nigerian institutions in the pursuit of the educational needs of ex-agitators.” Under the bill, one per cent of TETFund and UBEC fund will be used in funding the agency for rehabilitating the terrorists. The agency will also be funded by 0.5 per cent of the federal allocation of the six North-East states.”

“The bill, sponsored by Senator Ibrahim Geideam, representing Yobe East, has passed the first reading in the Senate. Among the likely beneficiaries under the bill will be 25 Boko Haram members and their wives, who recently arrived in Maiduguri, the Borno State, after they reportedly surrendered to troops in Niger Republic.”

1. adequate reparations for victims of Boko Haram atrocities;
2. the delivery of humanitarian assistance to those much in need;
3. access to free, inclusive and quality education to Nigerian children from socially and economically disadvantaged sectors of the population. Any such bill should remove school fees and charges to ensure all students can access school equally, and target financial support for girls at risk of dropping out through girls’ education strategies;
4. accelerate effective prosecution of alleged repentant Boko Haram members and other members