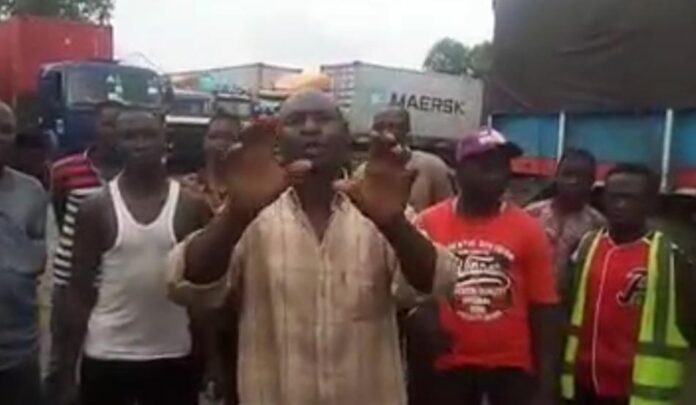 Truck drivers from the Northern part of the country have raised an alarm over cruelty and reckless extortion continuously meted on them by men of some security and law enforcement agencies.

The trucking industry is arguably the heart of Nigeria’s commerce, with thousands of goods being ferried daily across the country, via this means of transport.

However, men of the Nigerian Police Force (NPF), Nigerian Army (NA) and the Nigerian Security and Civil Defence Corps (NSCDC), as a result of greed, seem to be frustrating the efforts and activities of key operators of the industry.

In a video obtained by Arewa Agenda, truck drivers from Kano, Kaduna, Bauchi, Maiduguri and other Northern States, who briefly converged at a trailer park in Port-Harcourt, Rivers State, decried the alarming level of extortion and abuse they have been enduring from security men when undertaking their legitimate duties.

According to the leader of the truck drivers, who spoke in Hausa, “The situation is so incredible that we may be transporting goods worth sometimes as little as three hundred thousand naira only for an example, from the North to the South or vice versa. But before you get to your destination, you may have spent over a hundred and fifty thousand naira on uniformed men alone.

“It has gotten to a point where if you don’t give them money, they will ask you to park and if you park and refuse to oblige them, they will threaten to shoot you and boast that nothing will happen if they kill you.

“Civil Defence officers, Soldiers, and Policemen have made it mandatory on us to settle them before we pass. We are calling on the government and necessary authorities to act fast, and check this act of misconduct by security men.”

Speaking further, he said only immigration officers are not extorting them, noting that it could be due to the fact that they are not stationed on the highway.

“Truck drivers are being treated like robbers. And we are the ones transporting the same food that feeds the Nation. Now, we are ferrying fertilizer from Port Harcourt, and all the drivers that loaded have set aside hundred and fifty thousand Naira each for road passage. Even at that it may not be enough. If you refuse to give, they will threaten to shoot and boast that the highest that will happen is that they will be redeployed,” the truck drivers’ leader added.

Expressing dismay that the situation has deteriorated so much that drivers are being extorted right in front of barracks, he stated that the released video is just a warning that may lead to them mobilizing all commercial sectors to boycott activities until their plight is being addressed by relevant authorities.

“It has gotten to an extent that they would abuse us, beat us like thieves. What do they want us to do, do they want us to become hoodlums or what? We have family, the little we have eked for them, soldiers will deprive you, in fact soldiers and touts are now working in cahoots. If you settle them, they will direct you to go and settle the touts as well.

“For God sake, we are citizens, we travel to Cameroun, Niger and other countries, the way we are being maltreated in our own country, these countries don’t threat us as such. There is nothing these people have not been doing to us in the past, but now, push have come to shove, they will even burst our tires on the road until we pay before we are allowed to tow it away,” we said, while calling on concerned authorities to take urgent action, otherwise the situation will escalate.

Another truck driver who said he was a victim, revealed that soldiers even threatened to burn down his truck in Ahoada, Cross River State.

“We are not forcing the Government as citizens to give us job, we are working hard to be self-employed yet the environment is not conducive,” he noted.

Reacting to the development, spokesman of the Nigerian Security and Civil Defence Corps, Emma Okeh told Arewa Agenda that the NSCDC is yet to receive any formal complaint to that effect, but assured that the Corps frown at such conduct by its men and will not hesitate to deal with any officer according to the full extent of the law if found wanting.

However, the Coordinator Defence Media Operations, Major General John Enenche and Police Spokesman, Frank Mbah, was not available for comment at the time of this report.

Arewa Agenda is a publication of young writers from Northern Nigeria towards National Development and Peaceful Coexistence through positive narrative.